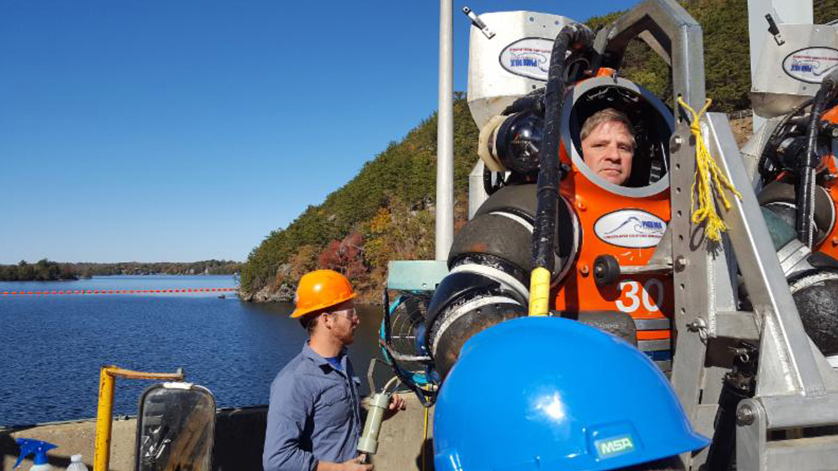 Phoenix International Holdings, Inc. (Phoenix) recently completed an annual inspection of the Smith Mountain Lake Dam in Virginia for Appalachian Power, a division of American Electric Power (AEP), using its one man, one atmosphere HARDSUIT™ Atmospheric Diving Systems (ADS); working in depths of 200 feet with limited visibility, two ADS and their accompanying 7 man team (including 3 pilot/divers) took six days to perform the work operating up to eight hours each day.

Inspection tasks on the 53 year old dam included looking for changes in the concrete, evidence of corrosion and disintegrating fasteners, checking screen rollers and replacing cables on intake screens.

Commenting on the work performed by Phoenix, AEP Diving Coordinator Dustin Zirkle stated, “I want to thank Phoenix and their team for the great work, attention to safety, and professionalism displayed. They did a superb job and I look forward to working with Phoenix again in the future.”

Tom Bissett, ADS Manager for Phoenix added, “AEP management has historically paved the way in diving safety on the Smith Mountain Dam; as 50 years ago they introduced the first civilian saturation diving complex to work at the bottom of the structure.” He continued, “By utilizing Phoenix’s HARDSUIT™ ADS we were able to save the client time and money by eliminating the need for normal diver decompression times. Operational efficiency was also improved upon since the suits were able to function anywhere in the water column in the same dive, something a soft suit diver cannot do due to excursion limits imposed on them by physics and physiology.”