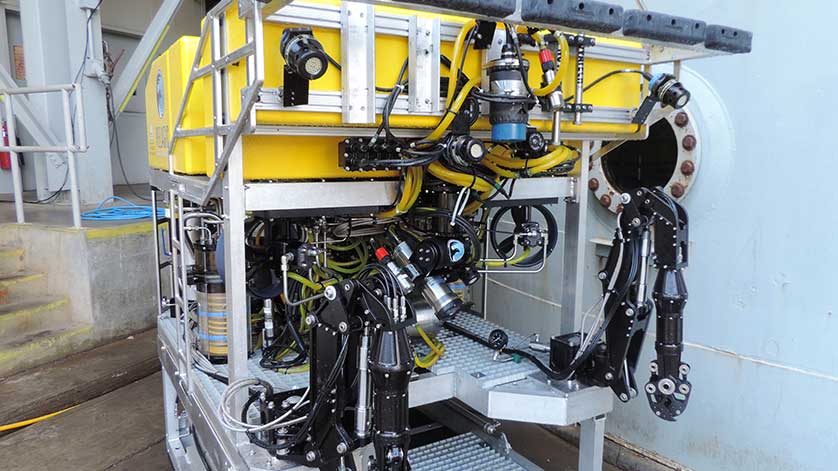 Pelagic Research Services (PRS) recently completed an extensive redesign of its 6000-meter ROV System Odysseus, which included in-water commissioning and verification of all ROV systems, including endurance and full power tests. Odysseus is now available to support projects on a global basis. Completed by MPH Engineering, the new system is designed to serve the offshore industry as well as ocean research and exploration communities around the world.

The Odysseus ROV System includes a payload skid with a hydraulic activated tray measuring 47 3/4"(W) x 32 "(L) x 15" (H). This tray can be fully extended beyond the ROV and, as an example, can easily accommodate over 18 push cores, insulated tubes for coral genetics and separate bio boxes for other samples like sponges and rocks. To ensure every dive is efficient and successful PRS provides two five-function manipulators or can easily provide one or two seven-function manipulators if required by the project.

Odysseus is equipped with a SubC 1Cam Alpha (MK5) HD fiber optic camera. This camera is equipped with a 10x optical zoom mounted on a hydraulic pan and tilt. Six SD cameras are also provided with the ROV. These DeepSea Power and Light cameras include Multi-SeaCams, Wide-i SeaCams and a Super Wide-i SeaCam. A data overlay system providing germane ship and ROV navigational information is provided on the main HD video stream. Raw and processed full-resolution HD video is available in the control room where 4 separate video streams may be recorded on both solid state drives and other digital media. The video viewing and recording suite utilizes a master time clock to synchronize all of the image streams and navigational data collected. The HD camera also comes equipped with 512 gigabytes of internal memory which serves as a functional back-up to the primary video data recorders. The ROV main HD camera also takes 4 to 24 megapixel native digital stills. Lighting is provided by 6 to 9 DeepSea Power and Light 5000-lumen, individually-dimmable LED lights. These lights can be placed anywhere on the ROV to provide illumination to complement the full suite of cameras.

Odysseus uses a Greensea Inertial Navigation System coupled with the following aiding sensors: Tritech Altimeter, TRD Workhorse DVL and Paroscientific depth sensor. Odysseus also utilizes the Greensea Balefire Workspace which allows for discrete monitoring of all ROV navigational sensors, ship navigational data, USBL data and additional sensors as requested. Navigation solutions for the ROV as determined by the INS are presented along with critical ROV and ship data in this workspace. This Balefire Workspace serves as a tracking and navigation interface as well as serial data management system. Unique to Balefire, the Odysseus Tritech SeaKing SONAR is seamlessly overlain on the tracking data providing a critical visualization of the subsea environment. The Balefire Workspace with all of the navigation and SONAR data used to populate the interface is recorded every dive as unique event. These logs, coupled with video from each dive, can be replayed at a later date by the client to provide an excellent tool for post-expedition analysis.

PRS has established offices at the Stennis Space Center in Mississippi to support the recently announced joint asset and expertise collaboration with the University of Southern Mississippi (USM). Odysseus is housed at Stennis and is in close proximity to the USM’s Research Vessel Point Sur. (Projects that seek ship and ROV operations may want to consider this collaboration as a one stop solution.)

PRS has also been selected as a prequalified ROV service provider for the Ocean Networks Canada (ONC) University of Victoria, British Columbia, and recently completed a major project for ONC that involved recovering and replacing one of the primary nodes of the Neptune Ocean Observing System. PRS was also selected by the U.S. Government to complete a survey of critical fisheries habitat off the southeast coast of Alaska. PRS provided the ship as well the ROV for these projects.

The current Odysseus ROV System is transported via ground on two flatbed trailers and in three 20 foot ISO container for overseas shipment. Odysseus is easily integrated on ships of opportunity and is ready to meet the ocean communities’ subsea needs anywhere in the world.