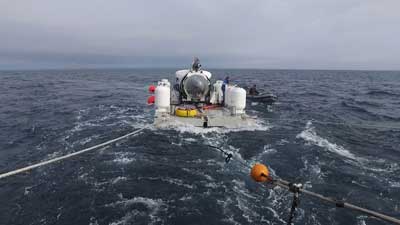 OceanGate, an ocean exploration company that has provided manned submersible services since 2009 and has performed dozens of expeditions in three oceans, did the mapping with a team of explorers conducting the first manned submersible operation to the wreck since 1995.

“Five times more people have been to the top of Mt. Everest than have seen the Andrea Doria wreck site, so this expedition was a rare opportunity for our crew – all while expanding our knowledge of the ocean,” said Stockton Rush, OceanGate’s Chief Executive Officer. “Using our five-person Cyclops 1 submersible, we were able to view the Andrea Doria area for nearly four hours, which is more than 10 times longer than scuba divers can.”

Rush said foggy conditions and rough seas prevented the team from conducting as many dives as they had hoped, but the team was still able to do 17 scans of the bow.

“Given the conditions, we got as much time on the wreck as we could,” Rush said. “We have great respect for harsh ocean conditions, and for the history of this infamous wreck, so ensuring the safety of our crew is always our top priority.

“We’ve always planned to revisit the Andrea Doria regularly to continue an ongoing mapping process, and what we captured will certainly serve as a benchmark for what we capture on future expeditions.”

This summer marks the 60th anniversary of the sinking of the Andrea Doria, the Italian passenger liner that sank in 1956 about 50 miles from Nantucket. The 697-foot-long wreck, often referred to as the “Mt. Everest of scuba diving” due to its location and 240-foot depth, tests the limits of scuba diving on compressed air.

Several hundred dives have taken place at the site over the past 60 years, but identifiable landmarks have decayed over time, making it more difficult for scuba divers to safely navigate the wreck during their 20-minute dives. Since the ship sank, 16 divers have died on scuba trips to the wreck.

OceanGate’s 2016 expedition began a survey of the exterior of the wreck to capture detailed multi-beam sonar images. The expedition included three dives in the manned submersible to begin mapping the wreck and debris field. The goal is to digitally assemble the sonar scans into a virtual model to help illustrate the full scope of the wreck and document its current condition.

Scott Parazynski, the only person who has flown in space and summited Mt. Everest, was part of the expedition crew: “I can say from experience that being at the bottom of the ocean is every bit as special. The expedition team was hampered by difficult conditions, but that’s a reality you live with in any exploration.”

Those involved in supporting the Andrea Doria Survey Expedition included iXBlue, which provided underwater navigation equipment; Teledyne Blueview, which provided multi-beam sonar hardware and software that enabled the team to capture sonar images; Boston Harbor Cruises, which supplied the support vessel Warren Jr. as a base for dive operations; and the University of Delaware College of Earth, Ocean and Environment, which is assisting with mapping the site.

“During each dive, we needed to approach the wreck at a specific place and heading to maintain maximum safety around the shipwreck site, and iXBlue’s navigation system kept us on course the entire time.”

OceanGate has been contracted by several individuals and organizations to do major submersible expeditions this year and next to advance understanding of the oceans. These expeditions are focused on iconic shipwrecks, locations of classic sea battles, archaeological sites of significance, and diverse marine habitats around the globe.

“More than 95 percent of our ocean remains unseen by human eyes,” Rush said. “So far we have only explored a very small fraction of the ocean using direct observations.”

OceanGate is currently developing the next-generation Cyclops 2 submersible, which will be capable of reaching depths of 4,000 meters (13,000 feet).

“We’re going to take mankind to the bottom of the ocean and discover things that no one can even imagine,” Rush said.