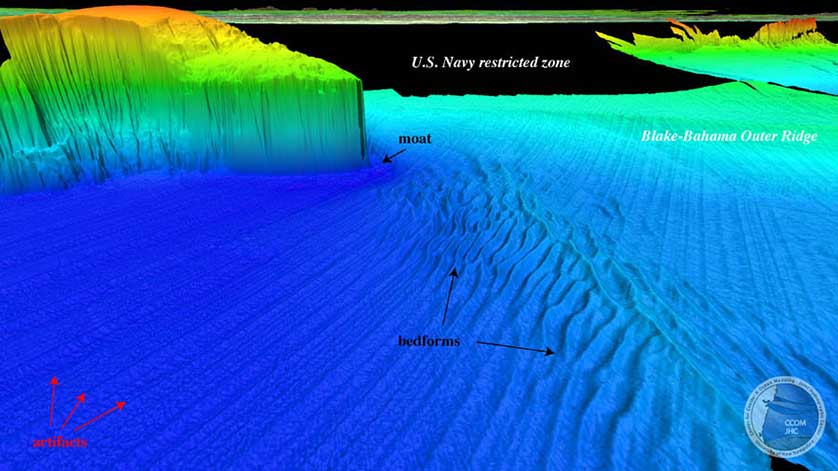 The ECS project is a multi-agency effort focused on helping the United States identify the extent of continental shelf seabed and sub-seafloor over which it can exercise sovereign rights beyond the nation’s 200 nautical mile Exclusive Economic Zone, consistent with the Law of the Sea Treaty . The U.S. ECS is predicted to be an important maritime zone, possessing many resources and vital habitats for marine life.

October’s operations target three adjacent priority areas east of the Blake Plateau, northeast of the Bahamas. These areas were designated as high-priority areas by the U.S. Extended Continental Shelf (ECS) Project Office. While the study area contains some publicly available transect multibeam bathymetric data, more complete coverage is required to meet the objectives of the U.S. ECS Project and boundary negotiation with the Bahamas. Exploration mapping operations prioritizes subsets of these areas that do not have any modern sonar data.

This mission aligns directly with the NOAA Office of Ocean Exploration and Research’s mission to collect publicly available, authoritative scientific data for use in making timely and informed decisions concerning the management of the seafloor. In addition to the multibeam bathymetry that will be critical for ECS studies, data collected during the expedition using the ship's sub-bottom profiler will also play an important role in understanding this poorly mapped area of seafloor and what is beneath it. 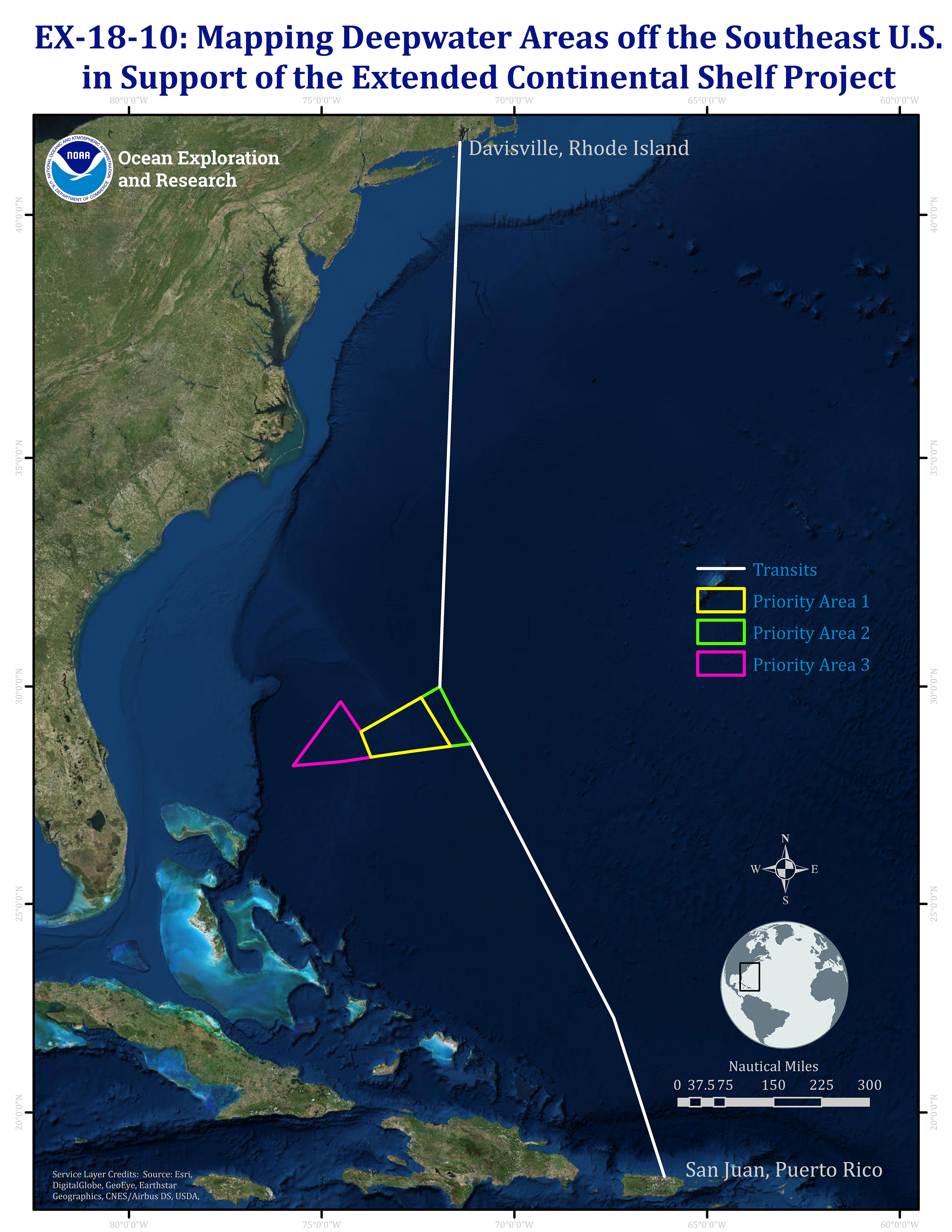 Map showing the three priority areas targeted for mapping during the expedition. Image courtesy of the NOAA Office of Ocean Exploration and Research.

The onboard mission team includes four Explorers-in-Training—early career scientists and students who will be trained in the latest acquisition, processing, and data management techniques of the sonar systems aboard the Okeanos Explorer. The on-ship team also consists of data managers and telecommunication engineers from the Global Foundation for Ocean Exploration, who support ship-to-shore communications and data management.

Along with the on-ship team, an onshore team are reviewing collected mapping data as it is delivered to shore. This team consists of advisors from the ECS Project, partners at the University of New Hampshire/Center for Coastal and Ocean Mapping, and other members of the NOAA Office of Ocean Exploration and Research Mapping Team. Upon review of the data, the onshore team, in real time, will be able to advise the on-ship mapping coordinator on where to map next as deep-sea features are revealed.

The October expedition is the third Okeanos Explorer expedition in support of the the Atlantic Ocean Research Alliance (AORA) Atlantic Seafloor Partnership for Integrated Research and Exploration (ASPIRE), a major multi-year, multi-national collaborative ocean exploration field program focused on raising collective knowledge and understanding of the North Atlantic Ocean. Building on the successes of the 2012-2013 Atlantic Canyons Undersea Mapping Expeditions (ACUMEN), the ASPIRE initiative will broaden its geographic focus to include more of the U.S. Atlantic and the high seas and the scope of partnerships to include federal agencies, such as the Bureau of Ocean Energy Management and the U.S. Geological Survey, as well as international partners from the European Union and Canada.

The ECS project is thought to be the largest and potentially most significant cross-agency marine mapping effort ever undertaken by the United States. Since 2007, NOAA and a consortium of 13 other U.S. agencies have been collaborating to gather and analyze field survey data, legal data, and seafloor samples to determine the United States' shelf outer limits. To date, the project has involved 36 surveys and over 900 days at sea. Over 3.3 million square kilometers (967,810 square nautical miles) of bathymetric data (practically equivalent to a land area the size of Alaska, California, Texas, Montana, and Kentucky combined) and over 27,000 linear kilometers of seismic data (comparable to the distance from New York City to the South Pole) have been collected