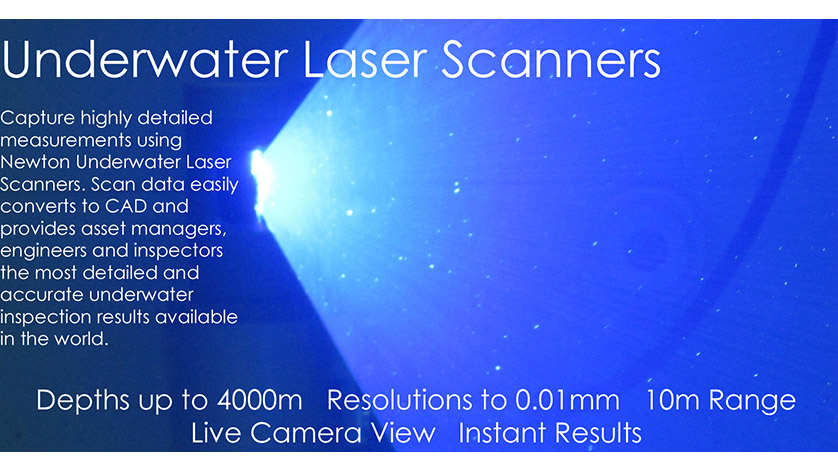 Since the introduction of the Newton Labs M500UW Underwater Laser Scanner early this year there has been increasing demand for greater precision measurement in even deeper waters.

Newton Labs has now developed and released three new underwater laser scanners to provide measurement to 0.03mm at depths up to 4000 Meters. The HRM1500UW reaches depths of up to 1500 meters, the HRM3200UW to 3200 Meters and the HRM4000UW to 4000 Meters. These scanners were first introduced last week at the Hydrographic Society of America Luncheon in Houston, Texas.

For the first time in the history of subsea industry, it is now possible to have true 0.03mm or better resolution measurement at depth. In the short time since the high precision Newton Labs M500UW Laser Scanner was introduced, it has been able to solve a number of industry issues that could not have been previously accurately measured.

The revolutionary M500UW, HRM1500UW, HRM3200UW andHRM4000UW provide the accuracy needed to meet these increasing industry requirements. These underwater scanners are available for purchase and for rent at major rental suppliers. Other models with longer ranges and depths to 4000 meters with similar accuracy are also available here.

For survey usage, Newton Labs ships all Underwater Laser Scanners with Full Certification Documentation to NIST Standards. (US National Institute of Standards and Technology- equivalent to ENISA and other National Standards)

The M500UW and deeper depth HRM models easily interface with ROV/AUV and IMU devices, either integral to the ROV/AUV or exterior IMU systems. The scanners draw their power from the MUX or ROV/AUV and only require 24VDC and GigEthernet. These scanners can also be utilized with cable mounting up to 100 meters.