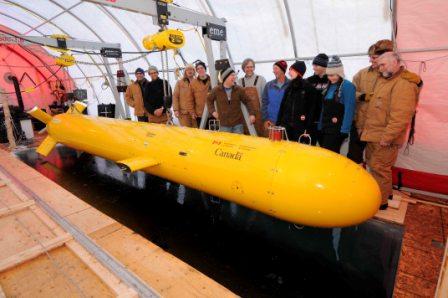 A new underwater robot that will help scientists answer important questions about the Antarctic is due to arrive in Tasmania in early 2017, thanks to a contract awarded to International Submarine Engineering (ISE).

Capable of diving to depths of 5,000 meters and travelling over 100 kilometers under meters of thick ice, the ‘Explorer’ class autonomous underwater vehicle (AUV) will be programmed to collect data on research missions.

In an innovative development, it will also be customized to collect physical samples from below ice-shelves; helping scientists to explore new parts of the Antarctic environment—and understand its impact on the global climate—in unique ways.

The AUV is funded by the Antarctic Gateway Partnership—a $24 million Special Research Initiative of the Australian Research Council that aims provide new insights into the role of Antarctica and the Southern Ocean in the global climate system—and by the Australian Maritime College (AMC), a specialist institute of the University of Tasmania.

Australian Maritime College Principal, Professor Neil Bose, said that the contract meant Tasmania was a step closer to realizing its ambitions as a global centre of excellence for underwater robotics.

“We are very pleased to have awarded the contract for our flagship new AUV to International Submarine Engineering. Their Explorer AUV is the most capable in the world for use under sea ice and will allow us to capitalize on the robotic age of Antarctic exploration.

“The Explorer will join a fleet of similar underwater robots in a $750,000, state-of-the-art facility, due to open at AMC in spring 2016. This world-class AUV hub will put AMC and Tasmania at the cutting-edge of research in this field and enable us to undertake a range of academic, defense and industry partnered projects.”

The ISE Group of Companies is a world-leader in the design and integration of autonomous and remotely operated robotic vehicles and terrestrial robotics.

“The Explorer is engineered for deployment in challenging, under-ice conditions. At seven meters long and weighing around two tons, its duration is exceptional and can travel over 140 km—or for 24 hours—without needing to be re-charged.

“It’s also highly customizable, and the engineering team will fit it with a full suite of instruments, including a tool for collecting samples from below thick ice-shelves.”

AUV researcher, Dr. Damien Guihen, explains how the unique features of the Explorer will help further scientists’ understanding of the Antarctic environment.

“The new AUV will allow us to answer important questions about the past, present and future of the Antarctic continent and fringing ice shelves, as well as their role in the global climate system.

“The ability to bring back physical samples from beneath ice-shelves is something that has not been possible before and is necessary to cast light on the complex interactions of the ice, land and sea.”

The Explorer will undergo sea trials in summer 2017 and is expected to arrive at AMC in the autumn.

For more information on the Antarctic Gateway Project, please visit their website.