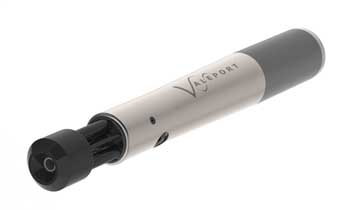 Designed initially to operate autonomously with the Teledyne OceanScience rapidCAST automated underway profiling system, the new Valeport automated profiler offers SV casts without the requirement of an operator on deck and delivers near real time sound velocity profiling data. Primarily for use with deployment systems and targeted at the shallow water survey market, the highly accurate rapidCTD incorporates Valeport’s world-leading technology and can also be compatible with other winch systems.

The robust automated profiler includes a conductivity cell designed for optimum flow-through, a fast responsive thermistor sensor and a 0.01% accuracy pressure sensor, synchronously sampling at up to 32Hz to deliver the most accurate water measurements.

Bluetooth technology makes communicating with the rapidCTD fast and simple. Powered by a single C cell(1.5V Alkaline or 3.6V Lithium cell) the rapidCTD is fitted with a solid state, non-volatile flash memory capable of storing over 10 million lines of data – equivalent to 5000 profiles to 1000m with a 1m profile resolution.

“Our new rapidCTD Profiler is an evolution of the Valeport fastCTD and rapidSV. It is a unique product in the marketplace and simply makes underway profiling work faster and more efficient, but with no compromise on the quality of the achievable data. It’s suited to the shallow water market, and like all our products it’s robust, manufactured to the highest standards using titanium for maximum durability. The rapidCTD is an exciting product and we’ll continue our commitment to develop innovative products to support hydrographic surveying with the introduction of further technology and parameters for the rapidCTD later this year”

Valeport plans to further develop the rapidCTD by including an optional Fluorometer sensor and an enhanced, re-chargeable battery later this year.