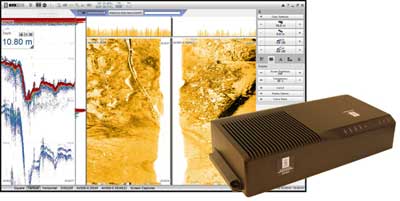 Kongsberg Maritime has released its fifth generation of singlebeam echo sounder designed for shallow to medium depth waters and for hull mounted side scan systems. The new EA 440 supersedes the established EA 400 single beam platform with the addition of a new Wideband Transceiver (WBT), which provides for much more flexible installation and operation. All users of the EA 400 will be offered an upgrade path to this new enhanced version.

The new WBT unit in the EA 440 covers all frequencies and comes with a complete new topside software with a number of new and improved features. The system now uses FM Chirp as the transmit pulse, which offers longer range from less power, resulting in a much higher range resolution. Re-engineered very low noise electronics, also support longer range capabilities.

The EA 440 is the fifth generation of KONGSBERG singlebeam echo sounder designed for shallow to medium depth waters and for hull mounted side scan systems.

The EA 440 hardware is designed for using up to four channels at the same time in a small and ruggedized transceiver unit, which makes for easier and more flexible installation. Taking flexibility even further, the WBT can be set up to use any frequency between 30 kHz and 500 kHz, which essentially means it can be connected to any transducers on the market. A standard setup is offered for easy integration together with all standard hydrographic transducers from Kongsberg Maritime.

“The EA 440 comes as part of a new wave of recent technology launches including our new multibeam echo sounder and new cNODE transponders,” said Helge Uhlen Director of UMAP Sales, Kongsberg Maritime. “We are pleased to bring these new products to market, and are positive that the new technology will support our diverse user base, from subsea survey to underwater construction, to operate more efficiently and to get better results in a more flexible manner.”

Over the past 20+ years, Kongsberg Maritime singlebeam systems have gained a reputation for being highly reliable with the very best performance available. The third generation of the EA shallow-medium depth echo sounder, the EA 500, was released in 1995 and quickly became the standard for all singlebeam surveys. The fourth generation, the EA 400 was released in 2004 in a small GPT version for two frequencies and has proven to be the most popular system of its type for over a decade.