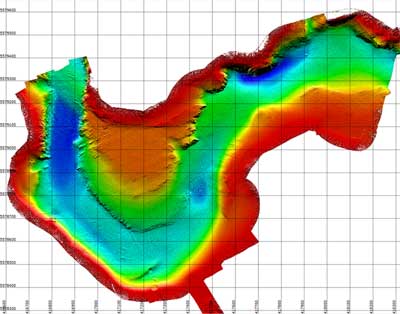 The latest release of Kongsberg Maritime’s advanced GeoTexture software for the GeoSwath Plus line of multibeam echo sounders introduces Calibrated Backscatter data. The update positions the combination of GeoSwath Plus and the latest GeoTexture as a unique solution capable of delivering calibrated images of the acoustic reflectivity of the seafloor.

The system, which has been developed as a result of KONGSBERG’s involvement with the GeoHab conference backscatter data working group, can be used for reliable and repeatable texture mapping and identification of seafloor types. The data generated will have important applications in marine habitat mapping, engineering and geosciences.

The backscatter working group was formed in 2013 as part of the GeoHab conference series. Chaired by experts and end-users from leading research institutions in the field, it was established to support development of systems that can acquire backscatter data that is meaningful to the end-user by providing repeatable values, independent of survey conditions.

KONGSBERG has supported the group’s efforts by providing information on its sonar technology and contributing to the guideline document and peer reviewed publications. In turn, KONGSBERG was able to leverage the findings and recommendations of the group to develop necessary algorithms and procedures to produce calibrated backscatter data with GeoSwath Plus multibeam echo sounders.

The system co-registers bathymetry and geo-referenced backscatter data in shallow water environments over a wide swath. During data acquisition, a procedure is followed to gather all necessary information to characterize the seabed response at the sonar frequency and to calibrate the transducers beamplots.

During data processing, using the latest release of the GeoTexture software, specifically developed algorithms account for sonar calibration information, range and absorption in the water column, transducer directivity, vessel movement, angular backscatter response and the slope of the seafloor. The result is a map of the seafloor showing the backscatter response for the given sonar frequency in absolute dB values.