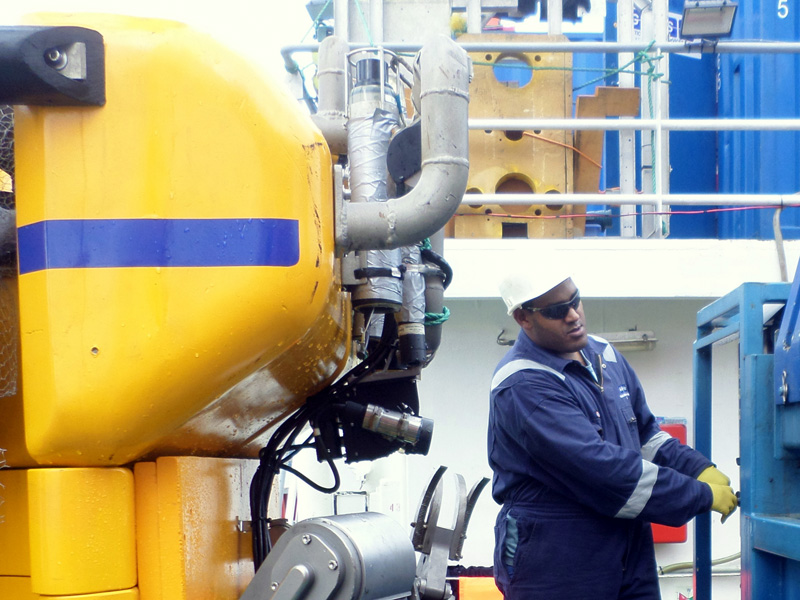 Emanuel Ekpeyong, Managing Director at GOSL, is more than satisfied with both the versatility and flexibility of the rack-mount USBL system; “The Nexus system has been mobilised as a stand-alone underwater positioning reference, back-up reference to vessel DP system and, in a complex setup, utilised with other equipment. Its compatibility with the additional systems we own is a real plus.” he stated.

The company deploys its Nexus USBL systems with 1000 Series Mini positioning beacons and the smaller 200 Series Micro beacons from Applied Acoustics. The larger beacons are most often mounted on the GOSL work class ROVs, such as its Argus Mariner or its Super Mohawk , but are also used to track divers during inspection work, for example during a subsea Hose Change Out Project that took place in waters offshore Equatorial Guinea.

One of the most recent projects using one of GOSL’s Nexus systems was a Mattress & Spool Piece Installation in Escravos, offshore Nigeria. Here the Nexus system was deployed for both underwater accurate positioning of the mattresses within tight tolerances and diver monitoring (air and sat dives at various depths).

“Our positioning services are constantly in demand in shallow and deep water for a variety of customers such as Exxon Mobil, Chevron and Shell that require underwater intervention, inspection and installation services, so GOSL have undertaken numerous projects utilising Applied Acoustics’ equipment that has always proved easy to use and reliable,’ stated Emanuel, ‘so we are convinced our overall operational efficiency has improved with these purchases.’

The Nexus system is just one of the USBL systems manufactured by the Great Yarmouth, UK, based Applied Acoustics. Others in the range include smaller ‘entry level’ units, portable units for on-deck deployment and militarised systems for use by defence forces worldwide.

Accessibility and Efficiency for Oil and

TerraSond Turns Up Survey Efficiency and