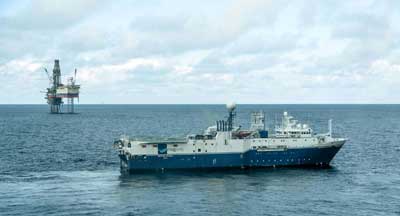 Beginning this month (July) and working in partnership with BGP on behalf of Saudi Aramco, the S78 project is expected to last nine months and will involve the deployment of a large network of ocean bottom recording nodes, each of which will be accurately positioned using Sonardyne’s Ranger 2 USBL (Ultra-Short BaseLine) and Small Seismic Transponder (SST) technologies.

However, any uncertainty in node positions can blur these pictures and make the underlying reservoirs more difficult to spot. Sonardyne’s Ranger 2 USBL installed on a surface vessel, coupled with SSTs fitted close to each node, overcomes this problem by providing high quality, repeatable positioning in all water depths.

For this summer’s Red Sea survey, Magseis will deploy its proprietary Marine Autonomous Seismic System (MASS), which uses thousands of small nodes to create a grid pattern of receivers on the seabed.

Since it is vitally important that the cables are laid in the correct positions to meet the client’s exacting standards, and also to avoid becoming entangled with subsea infrastructure, Magseis will attach its new SSTs near to the nodes at regular intervals along the cable. As the equipment descends through the water column to the seabed, each SST will be tracked in real-time using the Ranger 2 GyroUSBL transceiver permanently installed on the vessel.

Being small, low-cost and depth rated to 2,000 meters, SSTs are perfectly suited to withstand the demanding operational requirements of large-scale ocean bottom seismic surveys. They can even be left attached to the cables when they are recovered and reeled on to a drum, helping to minimize back deck manual handling operations.

Magseis has also ordered Sonardyne’s Lightweight Release Transponders (LRTs) and rope canisters to enable recovery of seafloor equipment following data acquisition. When commanded to do so, LRTs float back up to the surface, enabling the equipment to which they are attached, to be hauled up.

Commenting on the order, Trevor Barnes, Sales Manager at Sonardyne said, “Magseis have been long term users of our technology and we’re naturally very pleased that they have chosen to increase their investment with this major order for acoustic positioning and release equipment. He added, “We are continuously evolving our subsea technology to match the ever increasing demand for higher positional accuracy and increased measurement speed so that seismic operators can generate more detailed reservoir information whilst minimizing cost.”