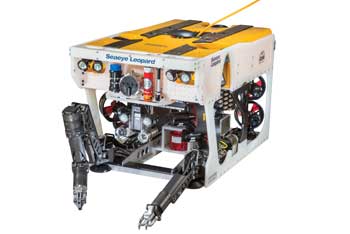 In the Arabian Gulf, Saab Seaeye’s pioneering new Leopard electric work ROV has survived its most challenging test yet.

“It was a baptism of fire,” admits CCC’s ROV Manager, Tavis Letherby, having launched the Leopard straight into a 570 kilometre pipeline inspection.

“We wanted to tease out teething problems and in the end we only needed to boost the cooling system to beat the heat. I trusted Saab Seaeye technology and the Leopard proved to be an excellent performing vehicle.”

Having a large fleet of Saab Seaeye vehicles, he was keen to experience the innovative new Leopard concept, particularly as its 11 thrusters and new iCON control architecture make it the most powerful ROV of its size in the world.

“I am very impressed by its work capabilities, which in many respects are comparable to an hydraulic work vehicle,” he said.

As a rule electric scores higher than hydraulic when it comes to working in strong currents and at high temperatures – it also produces higher quality survey data. Not least are the considerable savings made in lower operating costs, ownership costs and environmental costs.

“The Leopard has a work class way of thinking.”

Having experienced the collective capability of the ROV’s new iCON control architecture and its potent tooling resource, Tavis Letherby concludes with: “The Leopard has a work class way of thinking.”

The inspiration behind the concept, according to Saab Seaeye, was to produce a vehicle able to undertake the widest possible range of work tasks, in the most diverse environments, at the lowest cost of ownership.

Tavis Letherby explains why he is impressed:

“The Leopard can take larger tools than is usual for an electric ROV - and its third vertical thruster gives it an advantage over other ROVs.”

Turning to iCON, he says:

“An important benefit of iCON is the added functionality of station keeping, allowing the operators to concentrate on the task at hand - thereby reducing the workload on the operator and ensuring the task is performed in an efficient manner.”

The Seaeye Leopard, proven in the heat

Having 11 powerful thrusters also helps the Leopard stay on station when working in high current areas.

With iCON the Leopard effectively thinks for itself, leaving the operator free to concentrate on the task at hand. This comes from having refined the main electronics pod into an intelligent power distribution and data hub with the brains of the system relocated into sensors and actuators around the vehicle.

“I also like that iCON improves redundancy,” says Tavis Letherby. “It will isolate a problem in the water and find ways around the issue to keep the vehicle working.”

The operator also gets greater information to make maintenance simpler and quicker, along with remote internet access for upgrades and support.

Equipment changes are also easier, as distributed intelligence and building-block simplicity avoids the need to partially dismantle the ROV to reach a central electronic heart.

“The Leopard is a valuable option for cost savings.”

“Although the Leopard can’t do everything an hydraulic work vehicle can, it will take on most missions, including drill support, and with a 3000 metre rating, it can be a valuable option when looking for cost savings.”

For the Middle East it has a good footprint he says. “I find hydraulic work class vehicles too large and too heavy. The Leopard has a big advantage with its 25 ton complete package and small footprint, when compared with the 66 tons of a comparable hydraulic system which has a much larger footprint, takes longer to mobilise, has a higher maintenance cost, needs more staff and needs a larger service vessel – when there aren’t many large service vessels currently operating in the Middle East.”

With CCC operating right across the region, Tavis Letherby says he uses hydraulic work vehicles alongside his fleet of Saab Seaeye ROVs that range from observation to electric work options, but is always looking for vehicles that are smarter and which lower the cost of working.

“I like that Saab Seaeye has a core construct of thought in their system design with a continuity that helps our people familiarise themselves across the range. For instance we own a Panther XT Plus light work vehicle, and are pleased to discover that the Leopard, whilst being a completely new pioneering concept has incorporated into its design some of the proven features of the excellent Panther.”

There are other new ideas he likes in the Leopard including its large open payload bay that allows for ample tooling and survey sensors to be installed on sliding trays for rapid reconfiguration and easy maintenance.

The combination of its new chassis design together with iCON and its building-block capability means that more interchangeable equipment can be fitted than ever before in a vehicle of this size.

More demanding payloads can also be added, as the Leopard has a one tonne through-frame-lift capability and a four point docking system for tooling skids.

Throughout the trialling process in the Gulf, Tavis Letherby praised Saab Seaeye support.

“It’s easy to buy an ROV system, but to operate and maintain it is something else, and I know I can rely upon Saab Seaeye’s after sales care, which succeeds where others fail.”

He concludes by saying that the Leopard will be a very good match for CCC Underwater Engineering’s ROV operations across its wide range of tasks.

Mystery of Heat Loss from the Earth’s Cr