With a focus on the growing demand for pipeline maintenance in the offshore oil and gas fields, Kawasaki has been developing leading-edge component technologies of AUVs utilizing sophisticated underwater vehicle technologies fostered in-house over the years, with support from a subsidization project by the Ministry of Land, Infrastructure, Transport and Tourism (MLIT).*1

An AUV is capable of autonomously assessing and acting according to its surrounding conditions and circumstances while carrying out preassigned missions, which stands in contrast to the more widely used remotely operated vehicle (ROV), which needs a tether cable for its operation. As a result, AUVs can be operated without dedicated operators on the mother ship or special onboard equipment. Furthermore, tasks such as charging and transferring collected inspection data to the mother ship can be carried out while the AUV is underwater, which enables longer deployment time and reduces the frequency of launching and recovery work. These are expected to reduce the burden of the ship crew, offer greater safety, and reduce maintenance-related costs. 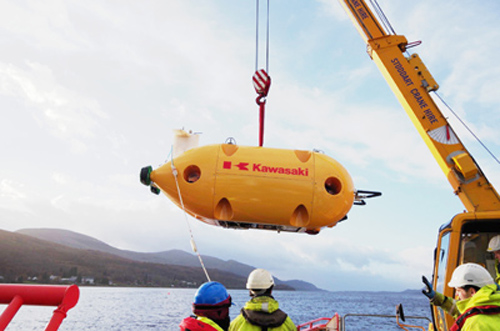 The AUV verification test was carried out from November 6 to 20, 2017 at The Underwater Centre, a marine testing and training facility in Fort William, Scotland. Tests at sea used a prototype AUV and a charging station, and included automated docking of the AUV to the charging station, contactless charging, and large-capacity optical communication operations.

During the testing period, representatives from major oil and gas companies, underwater vehicle and equipment operating companies, UK government organizations, UK subsea scientific societies and other organizations interested in Kawasaki’s AUV development efforts were invited to view demonstrations. Kawasaki received high praise from the attendees in relevant fields, with many expressing hope for future commercialization of the AUV.

Kawasaki plans to pursue full-scale development of a pipeline-inspection AUV which utilizes the automated docking and other component technologies tested in Scotland, as well as control algorithms*2 being developed in cooperation with the UK's Heriot-Watt University, with the aim of commercializing the AUV by the end of FY 2020.