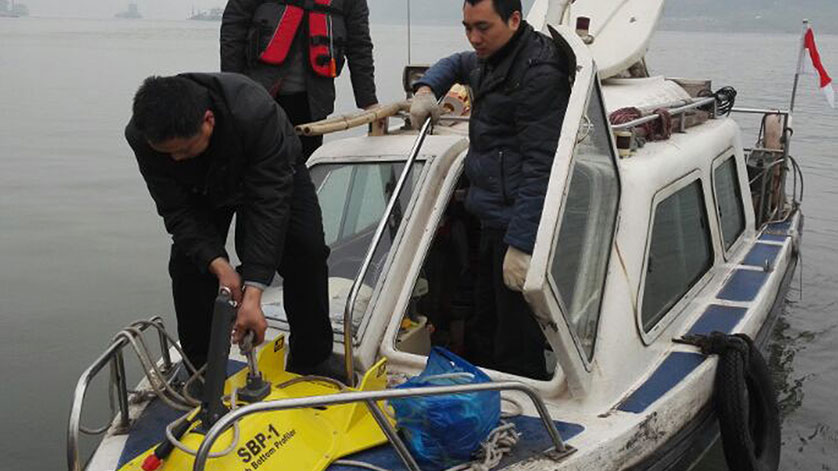 A variety of sonar systems are now being used by law enforcement and public safety dive teams, universities and salvage companies for recovery operations, subsea surveys, and marine research. Sonars produce almost photographic images of the underwater environment regardless of water clarity.

Side scan sonar can sweep several hundred feet of ocean, lake, or river bottom in one pass of the boat allowing large areas to be searched or surveyed quickly. Scanning sonar, which operates in water similar to the way radar operates in air, can image a 200 foot circle on the bottom in less than a minute. Sub bottom profilers transmit a sound wave that penetrates soft bottom and reflects off the harder substrate below showing what lies buried in the bottom. These sonar systems help save time and money, increase diver safety, and allow more extensive study of the marine environment.

China’s Yangtze River, known locally as the Chang Jiang, is the country’s longest river and the third longest in the world. It originates in the mountains of the Qinghai Province and runs from west to east, terminating in Shanghai where it pours into the East China Sea.

It is an economically important route for ships carrying freight from inland regions to the coast. The waters of the Yangtze are notoriously difficult to navigate with unseen submerged obstructions, treacherous crosscurrents and whirlpools. Many ships have been sunk and many others have lost precious cargo after being tossed about in the raging river. It is not unusual for large containers to be thrown overboard where they are quickly engulfed in the river’s muddy bottom. With new improvements in underwater imaging technology, a concerted effort is now being launched to locate the many containers littering the bottom of the Yangtze. One of the tools being employed in these salvage operations is JW Fishers SBP-1 sub bottom profiler. This low frequency sonar system can easily locate these cargo containers buried in the soft bottom.

Chong Zhao is an assistant professor at Dalian Ocean University’s Key Laboratory of Mari Culture and Stock Enhancement. His research includes work on how changes in the ocean environment affect marine life in the East China Sea. This area is an important food source for the Chinese people. Two of the tools Zhao and his team use to gather data are JW Fishers SSS-100K/600K side scan sonar and the SeaLion-2 ROV. The side scan provides high resolution images of the sea floor allowing scientists to clearly see the varying bottom conditions in different areas. The remote controlled underwater camera system then allows researchers to view and document the variety of marine life that inhabit these unique benthic environments.

Williamson Marine Service has been doing commercial diving and underwater engineering work in Hong Kong since its founding in 1968. The company utilizes an extensive list of high tech equipment in its operations. Video systems are used for inspections of underwater structures and ships. Sonar systems help locate shipwrecks, survey archaeological sites, find lost anchors and propellers, examine pipelines and sewer outfalls, and much more. Williamson recently acquired a JW Fishers SCAN-650 scanning sonar which can serve a variety of functions. Mounting it on an ROV aids in navigating the vehicle to underwater sites beyond the visual range of the onboard camera. The sonar can be deployed from a boat letting its sonar beam sweep a wide arc around the boat showing the topside operator what lies on the bottom. It can even be affixed to a diver’s helmet providing topside personnel a clear picture in a low visibility environment, letting them guide the diver directly to the job site.

When two recreational scuba divers went missing off Gonio, a coastal town on the Black Sea, Domenti Apakidze was working on a research project with the State Hydrographic Service in the Republic of Georgia. Domenti and his team offered to assist in the search using their JW Fishers SSS-100K/600K side scan. This sonar is a tool commonly used in hydrographic surveys. It creates a detailed map of the underwater terrain and any obstructions on the bottom that could pose a hazard to navigation. The side scan is also routinely used by law enforcement agencies and public safety dive teams to find sunken vessels, submerged vehicles, and drowning victims.