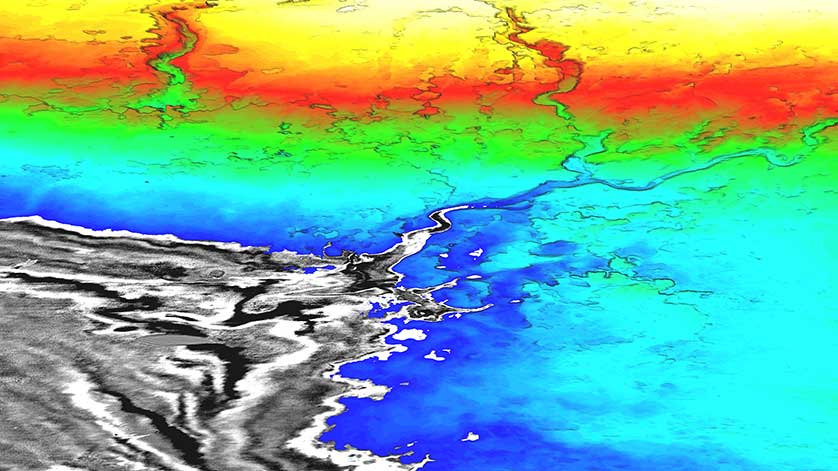 The aim is to provide a single source for all the available information about an area in a consistent, accessible and ready-to-use format, in order to maximize the value of the seismic data and provide a regional context to support exploration efforts. There are seven JumpStart programs nearing completion, offshore Mexico, Brazil, Gabon, Australia, Indonesia & Timor Leste, and Norway, with more programs in the pipeline.

The three major components of a JumpStart program are: the acquisition and processing, or reprocessing, of seismic data; collation and analysis of available wells, including core data where possible; and integration of this upgraded data, and other available information, into a comprehensive interpretation and evaluation of the basin’s petroleum system(s). The typical workflow starts with a regional geology review which forms the basis for the interpretation of the seismic data, basin model building, and play fairway analysis.

Well data represent true samples of the Earth and, as such, are essential to calibrate geological models. However, the number of wells available for review in JumpStart programs varies greatly, depending on the maturity of the basin and the data-release policies in the area; in the North Viking Graben, for example, 140 selected wells are being analyzed, whereas the Mexican Encontrado program uses 16. Therefore, a consistent petrophysical and stratigraphic review of the well data is undertaken to provide a robust chronostratigraphic framework for well ties. Where data is available, biostratigraphy is used to help define Consistent Stratigraphic Markers across the basin.

Previous well interpretations have frequently been found to be inconsistent, largely due to the scientific knowledge and tools available at the time the well was drilled. In the North Viking Graben, some older sands were wrongly assigned to be the Agat Formation, but closer examination of the age and composition enabled them to be reassigned and a better stratigraphic correlation was achieved between wells and seismic. Similarly, re-examination of the previous interpretation of wells in Mexico’s Encontrado program has significantly changed the understanding of the basin. Additional wells from the US Perdido area are now being analyzed to verify this. In Gabon, the re-interpretation of well data acquired through the pre-Aptian salt has revealed potential for an additional late syn-rift sand play to exist in the ultra-deep offshore area, different from the one commonly known as the Gamba sandstone.

Typically, the new stratigraphic markers and fast-track seismic data are used from an early stage to generate seismic-to-well ties to calibrate velocity models and formation markers, and are used for quality control throughout the seismic processing. The well data can also be used to generate pre-stack attributes and AVO gather synthetics which are used to control the quality of AVO signature preservation throughout the seismic processing flow.

Within this framework, additional data such as potential fields, geochemistry and satellite mapping of offshore hydrocarbon seeps are integrated into the imaging and interpretation of the seismic and the petroleum system evaluation. On completion of seismic processing, full structural and stratigraphic interpretation of the new data is performed for key horizons, and seismic attributes (pre- and post-stack) are extracted to map the potential presence of fluids and facies. Stratal Slicing on depositional horizons and spectral decomposition are used to provide a clearer understanding of lateral seismic facies and reservoir quality variations.