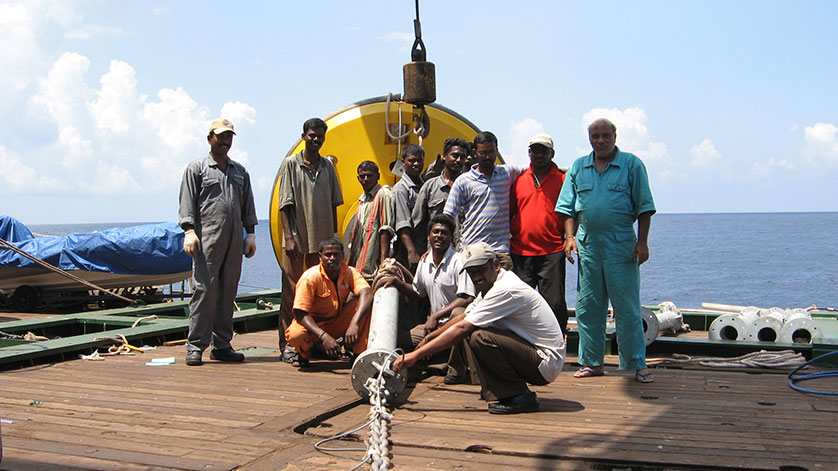 A network of deep water acoustic sensors which for the past decade has provided coastal communities around India with early detection of tsunami waves, has undergone major refurbishment by subsea technology company, Sonardyne International Ltd., UK.

Deployed at key locations in the Bay of Bengal and Arabian Sea, the Sonardyne Bottom Pressure Recorders (BPRs) detect the characteristic changes in water pressure (as little as 1 centimetre in 4,000 metres depth) caused by an earthquake in the deep ocean. If a tsunami wave is detected, an alert message is transmitted up to a satellite buoy on the surface, from where it is relayed to the Tsunami Warning Centre onshore for comparison with recent seismic activity. If validated, a widescale alarm is raised to alert vulnerable communities.

The detection system is owned and operated by India’s National Institute of Ocean Technology (NIOT) based in Chennai, and was conceived following the deadly Boxing Day Tsunami of 2004. Each BPR is a customised version of Sonardyne’s Compatt transponder – a versatile subsea instrument that has a wide range of autonomous monitoring and measuring applications within offshore energy, survey and ocean science.

Unlike other systems that are available, Sonardyne BPRs are small and self-contained and thus easy to deploy. This, together with features such as low-power consumption, long battery life and reliable through-water communications, were key factors in NIOT’s decision to award Sonardyne the contract to supply an Indian Ocean Tsunami Detection System back in 2007. The network of BPRs has remained in service for the last 10 years, detecting tsunami events on multiple occasions - none of which fortunately caused damage by the time they reached land. Data gathered by each unit on an hourly basis has been used by scientists to develop understanding of the deep ocean and improve tsunami prediction models across the region.

NIOT’s vessel visits the site of each sensor annually to carry out essential maintenance to the surface buoy and change the batteries inside each BPR - the deepest of which is deployed in 4,000 metres of water.

However, in reaching the 10 year anniversary, the decision was made by NIOT to recover the BPRs one at a time and return them to Sonardyne’s main service centre in the UK for refurbishment and re-certification. This work included replacing acoustic transducers, calibrating pressure sensors, replacing consumables and updating PCB firmware to the latest specification. All BPRs have now been returned to the field, equipped to provide many more years reliable service.

Speaking about the performance of the Sonardyne BPRs and the contribution they have made to the international science community’s understanding of tsunamis, NIOT Project Director Dr.Venkat said, “What started as a concept just after the 2004 tsunami incident, has matured to be a reliable scientific aid to the human race by providing a reliable data and a robust communication between the seabed and the deep ocean buoys.”

At a recent meeting of the World Metrological Organization and UNESCO in Geneva, Dr.Venkat was awarded a Certificate for Outstanding Service in recognition of the contribution he has made to promoting tsunami detection standards in Asia.

Daniel Tan, Regional Sales Manager for Sonardyne in Singapore said, “the organisation was proud to be associated with the achievements of Dr Venkat and all the team at NIOT for the past decade.”