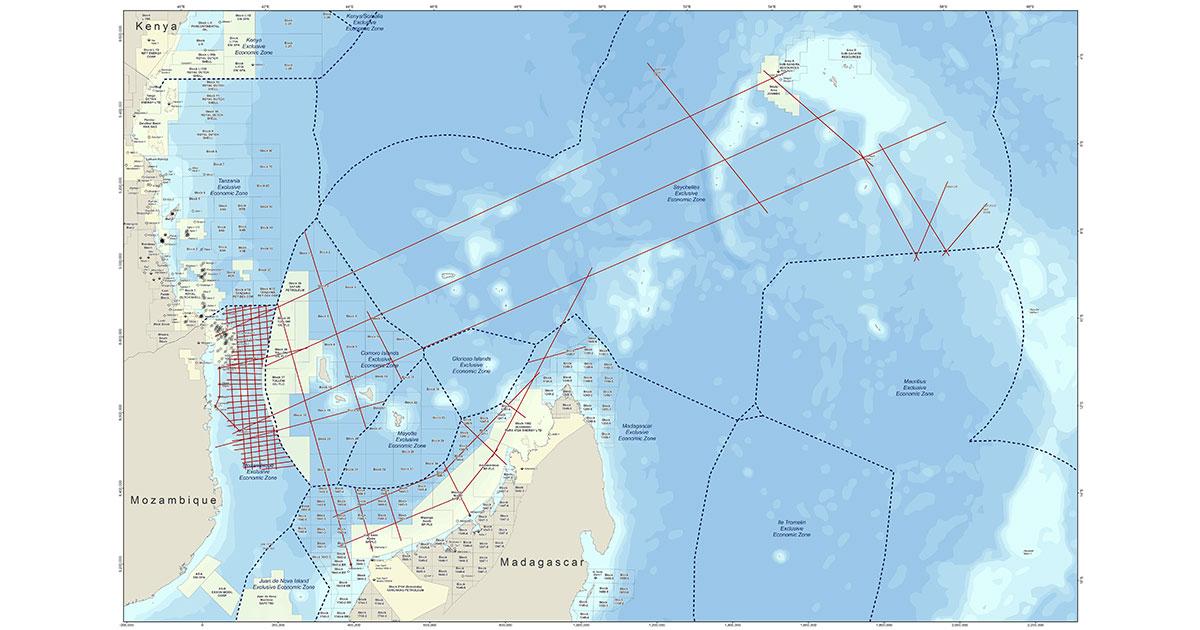 As industry interest in hydrocarbon exploration offshore East Africa increases, attention is turning to frontier areas in the region such as the West Indian Ocean. At first glance, this area looks like a barren oceanic crust with little potential, but there is tantalising evidence to suggest otherwise. CGG geoscientists have been sifting through the evidence to re-evaluate opportunities offshore East Africa and in the West Indian Ocean.

The best indication that a marine frontier region has exploration potential is the presence of continental crust, where there is an opportunity for working petroleum systems to develop in thick sedimentary basins. In this setting, the best chance for continental crust is the occurrence of micro-continents.

Legacy geophysical and geological data suggest that oceanic crust is pervasive throughout the West Indian Ocean, forming the Comoros and Glorioso Islands, Mauritius and much of the submarine ridge between Mauritius and the Seychelles. However, a number of recent investigations show overwhelming evidence for the existence of slivers of continental crust in the West Indian Ocean.

An example of a micro-continent in this region is the Seychelles Bank, where exploration wells drilled in 1981, about 120 km west of the main islands, proved the presence of a working petroleum system with oil shows and a mature Lower-Middle Jurassic source rock.

Robertson Plate Kinematics reconstruction models of the West Indian Ocean show the complexity of the poly-phased break-up of Gondwana, and suggest that there may be many more continental fragments similar to the Seychelles Bank scattered over the region.

Further hints to the existence of continental crust come from more recent geophysical and geological data. Studies on refraction seismic and gravity data in 2013 indicate that the continental platform on which the main Seychelles Islands are located may extend further to the west and south-west. To the south, evidence is also building for Mauritius, with gravity survey analysis indicating an anomalously thick crust of 25-30 km compared to the 5-10 km thick surrounding oceanic crust. This was supported by a geological study that showed that zircons found on Mauritius were of continental origin with varying ages of 660-1971 Ma.

To the west, a similar story is developing for the Comoros. Detrital zircons were found there in 2017, large sandstone xenoliths were found on the Comoran island of Anjouan and sandstone inclusions in lavas on Grande Comore and Mohéli. In addition, tar balls found on Grande Comore have been matched to a Jurassic source rock through geochemical analysis.

These observations are supplemented by offshore seismic reflection data acquired west of the Comoros islands and east of the Davie Fracture Zone that show tilted fault blocks with stratal growth at depth, demonstrating the presence of a rifted continental section in this area. Furthermore, the full extent of the Davie Fracture Zone was questioned in 2016, which would imply that the Madagascan continental shelf extends further north of the island and possibly as far as the Comoros.

These observations highlight the possibility that there are more prospective continental basins offshore East Africa and in the West Indian Ocean than is commonly thought. To test this hypothesis, CGG will step up the hunt for micro-continents with a new 2D multi-client regional survey. It will provide the new seismic, gravity and magnetic data necessary to perform an integrated interpretation study to assess the true hydrocarbon potential of this frontier region. For more details, visit CGG booth #720.