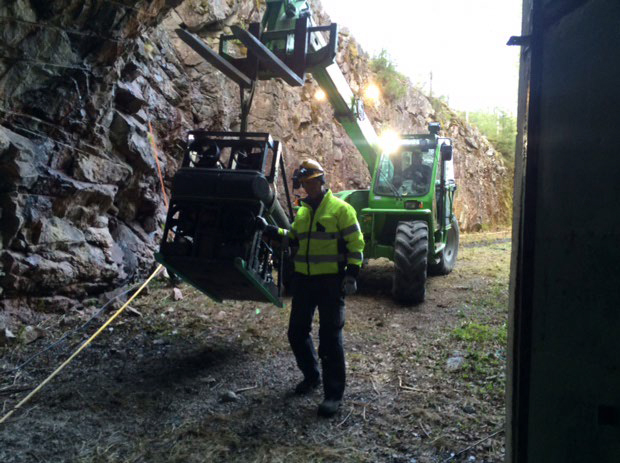 RTS AS needed a reliable and efficient method for wirelessly monitoring and retrieving data, in real time, from subsea structures during seabed installations in oil and gas fields.

The system had to provide real time heading, pitch, roll, depth, inclination and deflection information to the operator during installation. The system was based on an instrument frame containing a subsea logger and gyro with inclinometers and a battery pack. A set of high precision depth sensors were also installed in each corner of the structure and were used for deflection calculations. This information was required for precise positioning, leveling and regulation of the suction process during installation. All sensor data needed to be collected, time stamped and logged by the RTS subsea logger, and simultaneously transferred to the ship via acoustic link. To facilitate recovery of the system after the operations were completed, the Subsea Deflection Monitoring System (SDM) instrument frames also had to be equipped with an ROV recoverable bracket mount. Depending on the project, one or two identical systems would be installed on the structure; one as the primary system and the other as a backup system.

The ROV is driven down access shaft to the entry point of flooded tunnel. Photo credit: Teledyne BlueView

The Päijänne Water Tunnel in Southern Finland is the world’s second largest tunnel being some 120km in length. The tunnel has a cross section of 16m2 and enables a water flow of 10 cubic meters per second. Completed in 1982 the tunnel cuts some 30-100m below the surface under the bed rock to supply drinking water from Lake Päijänne to over one million people in the greater Helsinki area.

In recent years, repairs had been completed in parts of the tunnel but due to the challenging access to these sites, inspections to check the integrity and longevity of these repairs had not be conducted. Periodic inspection is critical however to ensure integrity of the tunnel and prevent any further collapse. Acquiring accurate high density 3D data without dewatering was clearly very advantageous as it allowed for structural integrity assessment to be conducted without the cost and risk associated with dewatering.

The vehicle selected for the mission was a SUB-Fighter 15k vehicle from Norwegian ROV manufacturer Sperre. With vectored thrusters the vehicle is highly maneuverable and in this instance was equipped with >7000m of tether over which communications could be made to/from a control cabin on surface. The vehicle was used to transport the Teledyne BlueView T2250 360 degree multibeam profiling sonar through the tunnel to collect 3D point cloud data and sonar imagery in Teledyne PDS throughout the transit along with a visual record from the ROV cameras.

The work was challenging as tunnel access points are up to 10km apart and some had steep turns in them making launch and recovery a logistical challenge. The remote access points also do not provide any facilities, so everything from power supply to sleeping space needed to be shipped in to each work site before work could begin!

The ROV operated at a slow pace due to the distances it was required to travel. The further it went into the tunnel, the slower it went due to drag. The return trip was even slower and precise piloting was required to reduce the risk of ROV breakdowns in the tunnel. Having to retrieve the ROV inside the tunnel would have been an unwelcome challenge due to the distance, water flow and access limitations. Profile and point cloud data were displayed real-time in the ROV cabin giving additional input to the pilot and further improving situational awareness in low visibility. Positioning information was also input directly to PDS ensuring precise location of any anomalies would be known (standard ROV supplied heading, roll, pitch and depth, sensors were combined with a precise cable counter manufactured by Teledyne RESON).

The tunnel was inspected without dewatering. A dense high resolution point cloud was created allowing engineers to take accurate measurements in all three planes from which an assessment of structural integrity could be made. Even loose rocks as small as 20-30 centimeters in length were quickly identified in the model (previously such targets might only have been found by trawling through hours of video records). 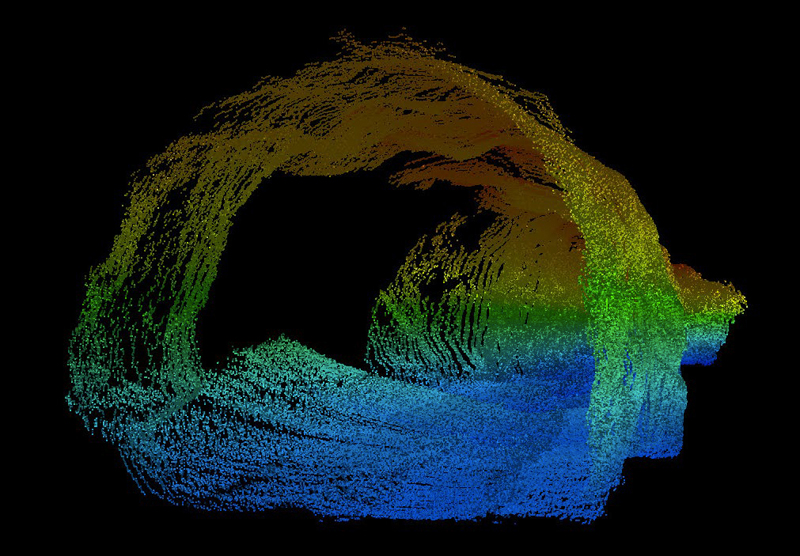 The 3D data set was detailed and comprehensive thanks to the high update rate, beam density and spatial resolution of the T2250 360 degree multibeam profiler. The use of the multibeam profiler gave considerably more information on the tunnel’s characteristics than single beam scanning sonars might have in the past and also made for faster data acquisition. Its small size allowed it to be integrated on an existing underwater inspection vehicle. Profiler measurements were displayed and recorded in real time, aiding piloting of the ROV while providing a permanent 3D data set for subsequent analysis. Teledyne PDS was used for 3D online visualization combined with several utility views to aid the ROV operator. Offline analysis has been done using PDS Processing utilizing the 3D editing possibilities that PDS provides.

The quality of previous repair work was assured and structural integrity was shown to be sound at the time of inspection allowing the client to maintain their routine operations. Water flow could even be increased without damaging the tunnel.

Please visit Teledyne BlueView here to find out more about this exciting project with even more images, information and video footage of the inspection all available.