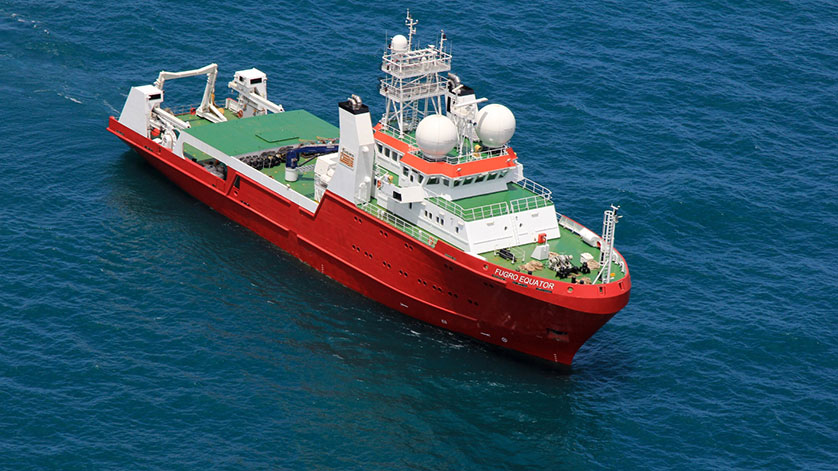 Fugro is leading the marine survey industry in support of NF-GEBCO Seabed 2030, a global initiative to produce a definitive, high-resolution bathymetric map of the entire world’s ocean floor by the year 2030. The initiative is being facilitated by the General Bathymetric Chart of the Oceans (GEBCO) project in partnership with The Nippon Foundation (NF) as a means to inform global policy, improve sustainable use and advance scientific research.

Much less than 20 percent of the world’s oceans are mapped using modern survey techniques and Fugro recognizes the importance of accurate seabed measurements (bathymetry) to numerous government, scientific and industry applications.

David Millar, Fugro’s government accounts director in the Americas explains, “As the world’s largest offshore survey company, Fugro is in a position to help close this data gap, and we are committed to doing our part through the Seabed 2030 project.”

One of the primary ways Fugro is supporting Seabed 2030 is through crowd sourced bathymetry data contributions. In 2017 the company devised a methodology for collecting valuable high-resolution bathymetry datasets while its vessels are transiting between survey projects. The approach is made possible through Fugro’s Office Assisted Remote Services (OARS®), its proprietary technology that enables safe and efficient data acquisition without the need for dedicated survey staff on board. In this way, valuable data can be collected from transiting vessels with minimal effect on Fugro’s standard operating procedures.

In 2017, Fugro deployed its in-transit data collection methodology on two survey vessels, delivering approximately 65,000 km² of crowd sourced bathymetry data to GEBCO. The company has recently expanded that collection capacityto include four survey vessels and intends eventually to incorporate the approach across its entire global survey fleet to make an increasingly significant impact on the Seabed 2030 program.

“Fugro has displayed exemplary corporate leadership by sharing transit data from two of its survey vessels,” acknowledged Seabed 2030 Project Director, Satinder Bindra. “In the coming months we look forward to receiving more transit data from all its survey vessels, which we believe will serve as a shining example to others in the industry and play an important role in helping us map the entire ocean floor for the benefit of humanity by 2030.”

Along with its own data contributions, Fugro is working with its clients to investigate how their datasets (existing and planned) may be incorporated into the Seabed 2030 program. In some instances, data sharing is straightforward, but in many others, datasets contain sensitive information. Reducing the data resolution to a suitable degree and/or delaying the release of datasets until an acceptable amount of time has passed can mitigate these sensitivities and ensure the integrity of client-owned data.

The company is also helping to establish a workflow for integrating third party datasets into the overall Seabed 2030 project database. The workflow will address such things as data formats and metadata standards, with the goal of simplifying and accelerating the rate of crowd sourced contributions and data sharing arrangements.

“We are proud to continue our support of the Seabed 2030 program and to lead industry participation in this way,” Millar said. “As an appreciable portion of our work is ocean related, Seabed 2030 provides a perfect opportunity for us to contribute to global society and practice good ocean stewardship.”