Gulf of Mexico a Blast for Saab Seaye Falcon 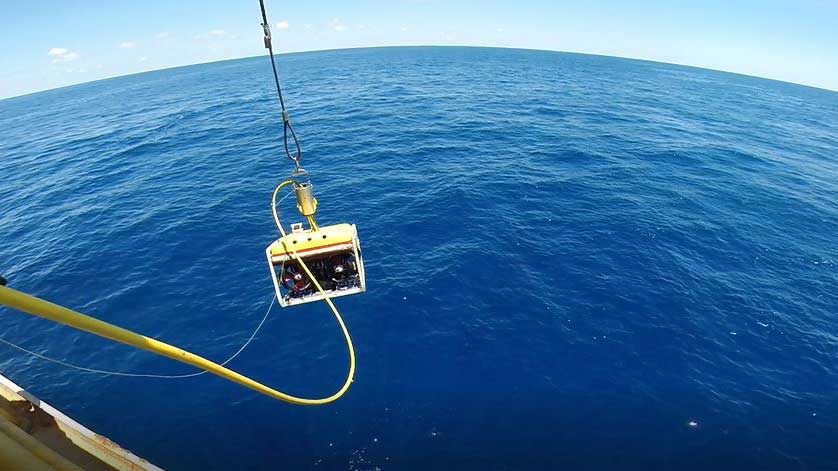 Cavity blasting 68 intake screens in six days at a drill ship, whilst working in eight-foot waves and 2.5 knot currents using the small Saab Seaeye Falcon, won a competitive advantage for Inquest Services in the Gulf of Mexico.

Despite its diminutive one meter size the Falcon held steady and stable against the 3000psi force of the cavitation blaster, a feat achieved by the Falcon’s intelligent control system and its five powerful thrusters – a design concept from Saab Seaeye that has made it a worldwide success..

“Using the Falcon was a sophisticated solution that gave us a competitive advantage over commercial divers,” declares Chris Walker, dive supervisor at Inquest, who undertake both diving and ROV services. “The Falcon was faster, safer and kept working for as long as needed.”

He describes how they removed up to three inches of hard growth on the 68 screens during the six days and up to two inches of soft growth in the vessel’s moonpool.

Another saving for the customer, explains Chris Walker, came from inspecting and cleaning the ship’s thrusters, as only the thruster the Falcon was working on needed to be shut down, rather than having to stop all thrusters in the quadrant, necessary for safety when work is undertaken by a diver.

His customers also liked that the extremely small footprint of the Falcon system had no impact on other operations on board the ship.

Prior to the start of the cleaning operation, Inquest sent the Falcon to visually examine the drill ship’s lower hull and side shell, along with the moonpool inside the vessel.

For the cleaning mission, Inquest created a modified tray to house the cavity blaster on board the Falcon in a complex but effective configuration, says Chris Walker.

He says the Falcon was the ideal choice for the undertaking:

“We needed a more sophisticated and effective solution to compete with commercial divers, which is why we chose the Falcon.

“There are lots of ROVs on the market but both Saab Seaeye and Falcon have a good track record.

“The Falcon has proven reliability and a simple plug and play intelligent control system that makes configuration easy - and it can perform a large assortment of tasks whilst maintaining stability in turbulent waters and strong currents.”

The unique character of the Falcon, that measures just 1 x 0.5 x 0.6 meters, has made it the most successful electric underwater robotic vehicle of its size in the world since its launch over 15 years ago.

Inquest is an independent marine asset management company that offers survey, inspection and repair solutions for the energy sector.

In their role, that also provides diving services, they see the Falcon going places too hazardous for diving operations and where the depth of water and strength of current are too dangerous for divers to operate.

But when divers are necessary dive time can be reduced by sending the Falcon down first to pinpoint the location of interest and, once the diver is at work, the Falcon can keep a watchful eye for added safety, along with saving dive time by transporting tools back and forth.