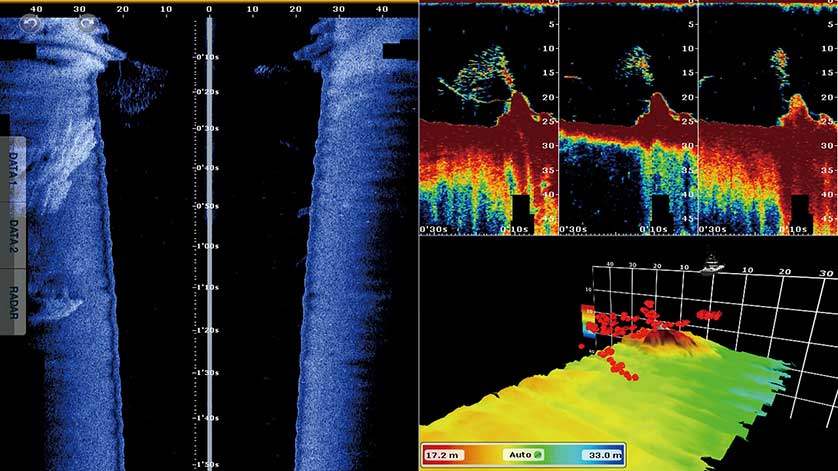 Furuno announces that it is bringing side-scanning capabilities to its flagship NavNet TZtouch and TZtouch2 MFDs with its latest network sensor called the DFF3D. This multi-beam Sonar takes the highly-desired capability to scan port to starboard under the vessel and adds Furuno’s commercial fisheries spin on it. This deep-water Sonar delivers a sidebar detection range of an unprecedented 650+ feet, while being able to see down to over 1,000 feet.

The DFF3D utilizes a new, compact multi-beam transducer, along with Furuno’s own advanced signal processing, to produce eye-popping images that will help you find and track fish. The transducer and fairing block is only 14 inches long, which makes this a perfect fit for boats of all sizes. To top it off, the transducer features a built-in motion sensor, which keeps the images stable, even in rough seas. Additional transducer styles, including a transom mount, are forthcoming. The DFF3D features four display modes to choose from and allows you to customize the display with the modes you use most. Choose from Cross Section, 3D Sounder History, Triple/Single Beam Sounder and Side Scan.

The Cross Section mode displays a real-time sea column echo in 120-degrees port and starboard. This mode helps you to instantly determine the distribution of bait, fish and the condition of the actual water column. The 3D Sounder History mode gives you an intuitive and easy to understand 3D image of the seafloor, along with icons that depict the fish distribution. This mode is very useful for determining fishing hot spots and assessing the seabed condition. You can mark spots in the sounder history and it will create a waypoint on your chart that you can navigate back to later. The Triple/Single Beam Sounder mode allows you to display traditional sounder images on the screen, or you can display left, center and right images all simultaneously. This will show you not only the depth of the fish target, but also the direction the fish are moving. All three of the beam angles and beam widths are selectable. Finally, the Side Scan mode shows you the shape of structure in a high definition image, both port and starboard. This mode is ideal for searching the seabed for any structures where fish may be hiding.

The DFF3D Multi-Beam Sonar brings you the ability to see the underwater world all around your vessel in real time. Fish targets are shown in 3D within the water column, allowing you to pinpoint fishing hot spots and mark them as waypoints for later. Amazingly, the waypoint contains the depth data, so you’ll know right where to drop your line! With the triple beam sounder, you can even watch the fish swim from one side of the boat to the other. With the addition of the DFF3D, Furuno’s NavNet TZtouch and TZtouch2 MFD’s have just become your most valuable tool for finding and catching more fish!