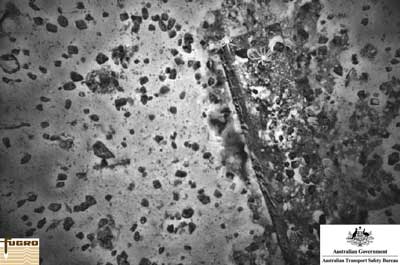 Two of Fugro’s vessels currently searching the southern Indian Ocean for the missing Malaysia Airlines flight MH370, were recently involved in an historic find - the discovery of a previously uncharted shipwreck at a depth of around 3,900 meters.

The wreck is likely to be that of a 19th century merchant sailing ship and so great is the detail that what is believed to be scattered coal can be seen throughout the debris, which may indicate that it had an auxiliary steam-powered engine. The debris also appears to include an anchor and the stunning imagery will be provided to expert marine archaeologists for possible identification.

It’s a fascinating find,” said the Australian Transport Safety Bureau’s (ATSB) Peter Foley, Director of the Operational Search for MH370, “but it’s not what we’re looking for. Obviously, we’re disappointed that it wasn’t the aircraft, but we were always realistic about the likelihood. And this event has really demonstrated that the systems, people and the equipment involved in the search are working well. It’s shown that if there’s a debris field in the search area, we’ll find it.” How the story unfolded When the deep tow system operated by Fugro Equator detected a cluster of small sonar contacts in the southern part of the search area, 12 nautical miles to the east of the 7th arc, the sonar data was carefully analyzed. It was categorized as Class 2 – ‘of potential interest but unlikely to be related to MH370’.

“It could not, however be ruled out,” said Peter Foley. “There were characteristics of the contact that made it unlikely to be MH370, but there were also aspects that generated interest, multiple small bright reflections in a relatively small area of otherwise featureless seabed.”

All sonar data collected by Fugro goes through a detailed analysis and an exhaustive review process to ascertain its quality, coverage and most importantly any sonar contacts of interest. “The analysis starts with the mission crew on board the search vessels,” continued Peter. “The data is then reviewed again ashore by sonar analysts at Fugro’s office in Perth and then it is independently reviewed by the sonar experts in the ATSB’s Operational Search team. The process is methodical, meticulous and it is designed to ensure that nothing is missed. In this case we planned to resurvey the contact in more detail.”

The Fugro Supporter was tasked to further investigate the contact, performing a high resolution sonar scan using Fugro’s Echo Surveyor VII autonomous underwater vehicle (AUV). The high resolution data revealed a large number of sonar contacts lying very close to the seafloor, at a depth of around 3,900 meters. The majority of the contacts were comparatively small – around the size of a cricket ball – interspersed with a few larger items, the biggest being approximately 6 meters in its longest dimension. Although the debris field appeared to be of man-made origin it did not exhibit all the characteristics of a typical aircraft debris field.

An additional AUV low-altitude mission was then undertaken using the underwater camera to gather images of the field. Analysis of the images revealed that the debris was actually the wreck of a ship.

Fugro’s search director Paul Kennedy of Fugro Survey explained: “This find has given us a great deal of confidence. It shows we are able to find small pieces of metal on the seafloor, a long way down. Pieces from MH370 would be roughly 10 times as big as those of the wrecked ship.” Extended search Senior Ministers from Malaysia, Australia and the People's Republic of China recently agreed to extend the search by an additional 60,000 square kilometers to bring the search area to 120,000 square kilometers and thereby cover the entire highest probability area identified by expert analysis. At an April meeting they received a detailed briefing on the thorough and rigorous work being undertaken to search for the aircraft, including details of the technology used in the underwater search, assessment and analysis of data collected and classification of sonar contacts.

Discussions also covered the challenges and risks in the search operations in such a remote and difficult location in extreme depths. The additional search area may take up to a year to complete given the adverse weather conditions in the approaching winter months. Regularly updated information, including illustrations, is available here.

Fugro Focuses on Technology for Offshore

The Cloud is the Limit for AgileTek Proj