FlatFish: Investing in the Next Generation of Underwater Vehicles 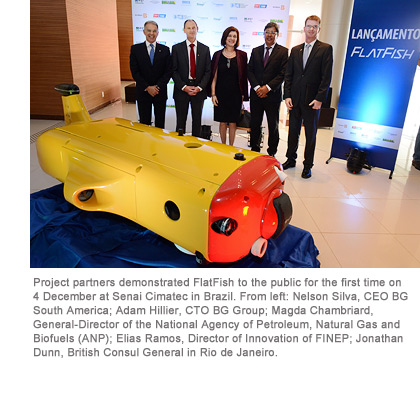 Vehicles that make detailed inspections of subsea pipelines, facilities and structures are the focus of an R&D project – codenamed FlatFish – being undertaken by BG Brasil and the Brazilian Institute of Robotics (BIR).

FlatFish will be a lightweight, low cost vehicle able to carry out subsea inspections completely autonomously. It will reside subsea and be capable of undocking from a submerged docking station, carrying out an inspection mission and returning to base, all without human intervention. As a result, in addition to obtaining traditional 2D video footage, we will be able to build 3D state-of-the-art visual reconstructions of equipment and structures, which will help us identify any collision or impact damage, the presence and nature of defects, and make an assessment of the overall structural integrity.

Historically, remote operated vehicles (ROVs) or divers have been used to inspect underwater structures, but these methods are more costly, inefficient and can take many weeks to plan and deploy. While ROVs require specialist support vessels with large numbers of personnel on board, FlatFish will operate without human intervention – other than defining the inspection mission and initiating the launch. In addition to the obvious cost savings, it will eliminate the safety risks attached to operating ROV vessels, and it can be deployed whenever required. Therefore Flatfish will be a useful emergency response tool for offshore operations.

BG Brasil demonstrated Flatfish to the public for the first time in December 2015 at the Senai CIMATEC university campus in Bahia, Brazil.

The Flatfish project aims to reduce operating costs and mitigate production losses and the risks of major accidents through increased inspection frequencies, and higher-quality inspection results.

The first phase of the project has developed, tested and trialed two prototype vehicles: one has been built and tested in Germany and the second in Brazil. A second phase will be launched in early 2016, leading to the construction of a production vehicle, which will be field-trialed in a BG Group asset. Future developments will include the addition of manipulation and intervention capabilities to the vehicle.

Part of a comprehensive, five-year program

The FlatFish project is the first initiative under a long-term collaboration between BG Group and BIR, funded through the Brazilian government's R&D levy, which requires that 1% of gross production revenue from large Brazilian oil and gas fields to be invested in R&D in Brazil. Due to its innovative characteristics, Project FlatFish also received special funding from Embrapii (a Brazilian company funding research and industrial innovation, managed by the Brazilian Ministry of Science, Technology and Innovation).

In November 2013, BG Brasil signed a long-term framework agreement that establishes BG Group as a founding member of the Brazilian Institute of Robotics. Located at Senai CIMATEC in the state of Bahia, the BIR was established in 2013 through a partnership with the German Research Center for Artificial Intelligence (DFKI), and with support from the University of Bremen.