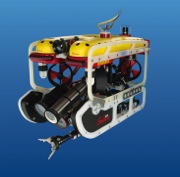 But in a crowded and mountainous country the search for sites must go offshore, with floating turbines the main option in the deep waters off the rugged coastline.

It is at the southernmost tip of Japan that the Ministry of the Environment is trialling a turbine to determine the viability of floating wind turbines, in a bid to help replace the 30% of energy lost since the nuclear shut-down.

Sure-footed anchorage to the seabed is vital in such a vulnerable environment and a Saab Seaeye Falcon ROV is being used to check the integrity of the 400 metres of chain to mooring points 100 metres down.

With many turbines to be installed at a depth of 100 metres or more, setting the anchor securely is vital for the safe location of these turbines offshore.

Avoiding twists and entanglements of the 400 metre lengths of chain over a long period of time is also of vital importance, say the research experiment group of the project.

The Falcon, operated by Shibuya Diving, helped monitor the anchor holding test, and the analysis of anchor drag, as well as twist and entanglement.

Shibuya Diving chose the Falcon because it could be deployed from a small workboat at a low operating cost and has a proven reputation amongst many different operators across the world for undertaking a wide variety of tasks.

It is small and easily manhandled, yet has the power to cope with strong currents around the anchorage whilst loaded with the hefty high-definition camera needed for the task.

Although compact, the Falcon is renowned for performing precise work whilst carrying a heavy payload of cameras, sensors, sonar systems and manipulators. It is also packed with advanced intelligent technology usually found in much larger underwater vehicles.

With more offshore turbine installations planned, Shibuya Diving intend developing a special work vessel from which to operate the Falcon.

The system was sold by Oceanvision of Singapore with further training support from Japanese-speaking, California-based Symphotic SaabSeaeye underwater systems are used at many offshore wind turbine sites around the world, where their range of powerful, low-profile vehicles are specially suited for working with precise manoeuvrability in confined spaces and strong currents.