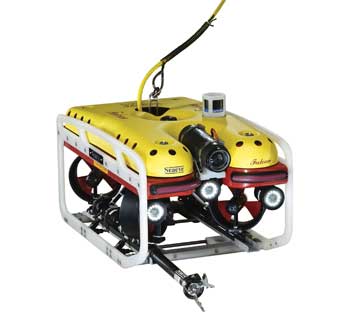 The Saab Seaeye Falcon ROV has won over Perenco Oil in West Africa.

“For me, the Falcon is the best tool for our operations,” says Cédric Fratacci at Perenco Oil and Gas, Gabon, declaring it to be: “A small, yet highly efficient ROV.”

He describes how their new Falcon is undertaking a range of tasks at their Gabon operations, including pipeline and jacket surveys, rig assistance and FSO inspection.

It has also been deployed with their diving team to remove debris from the seabed ready to clear the approach for the arrival of a rig.

The Saab Seaeye Falcon: “It is a small, yet highly efficient ROV.” Cédric Fratacci, Perenco Oil and Gas Gabon

Later the Falcon was sent down to check the position and security of spudcan penetration in the sand.

Cédric Fratacci welcomes the cost savings of using the Falcon rather than a diving team for dedicated operations.

“The Falcon can dive to a greater depth than a diver, and avoids the need for decompression time,” he says.

But when diving is unavoidable, he adds, “the Falcon can assist in the diving activity by becoming an external camera for the diving supervisor.”

The world-wide success of the Falcon in the energy industry, and other sectors, comes from its small, easily manhandled size, together with five powerful thrusters for precise manoeuvrability and steadiness in strong cross-currents whilst undertaking precision tasks and observations.

Also, its distributed intelligent control system with each device on the vehicle having its own microprocessor, allows a choice of tools and sensors to be easily added or changed, making it an ideal platform for numerous intricate and demanding subsea applications.

As a module-focussed concept, the Falcon generates automatic diagnostics on power-up to ensure that each device is fully interfaced and working correctly.

Recognition and acknowledgment of the Falcon’s capabilities by Perenco is important because of their leading role in the production, development and exploration of oil and gas around the world.