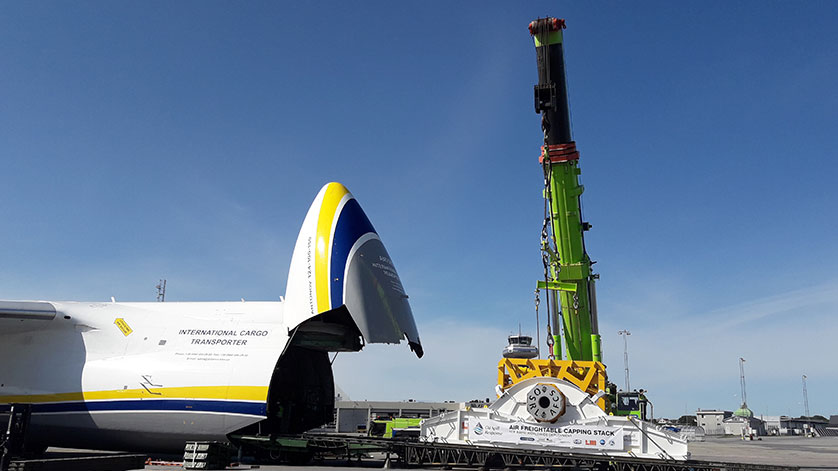 Oil Spill Response Limited (OSRL) has reached another important milestone in the development of its subsea capping and containment response capabilities – successfully completing an air transport test flight of a fully assembled subsea capping stack for the first time.

The newly demonstrated expertise has the potential to significantly reduce capping stack mobilization times, and represents the realization of a key objective for OSRL and all those involved in its Subsea Well Intervention Services (SWIS).

Matt Clements, OSRL’s director of SWIS, commented: “At OSRL, part of our mission is to constantly identify new ways to better support our members and adapt to their changing requirements through new technology, equipment and processes. From our leading role working with the Subsea Well Response Project (SWRP), to the recent development of our Offset Installation System for subsea wells, to today and the realization of another major achievement, we are continuing to lead and demonstrate the value we provide to our members and the wider industry.” 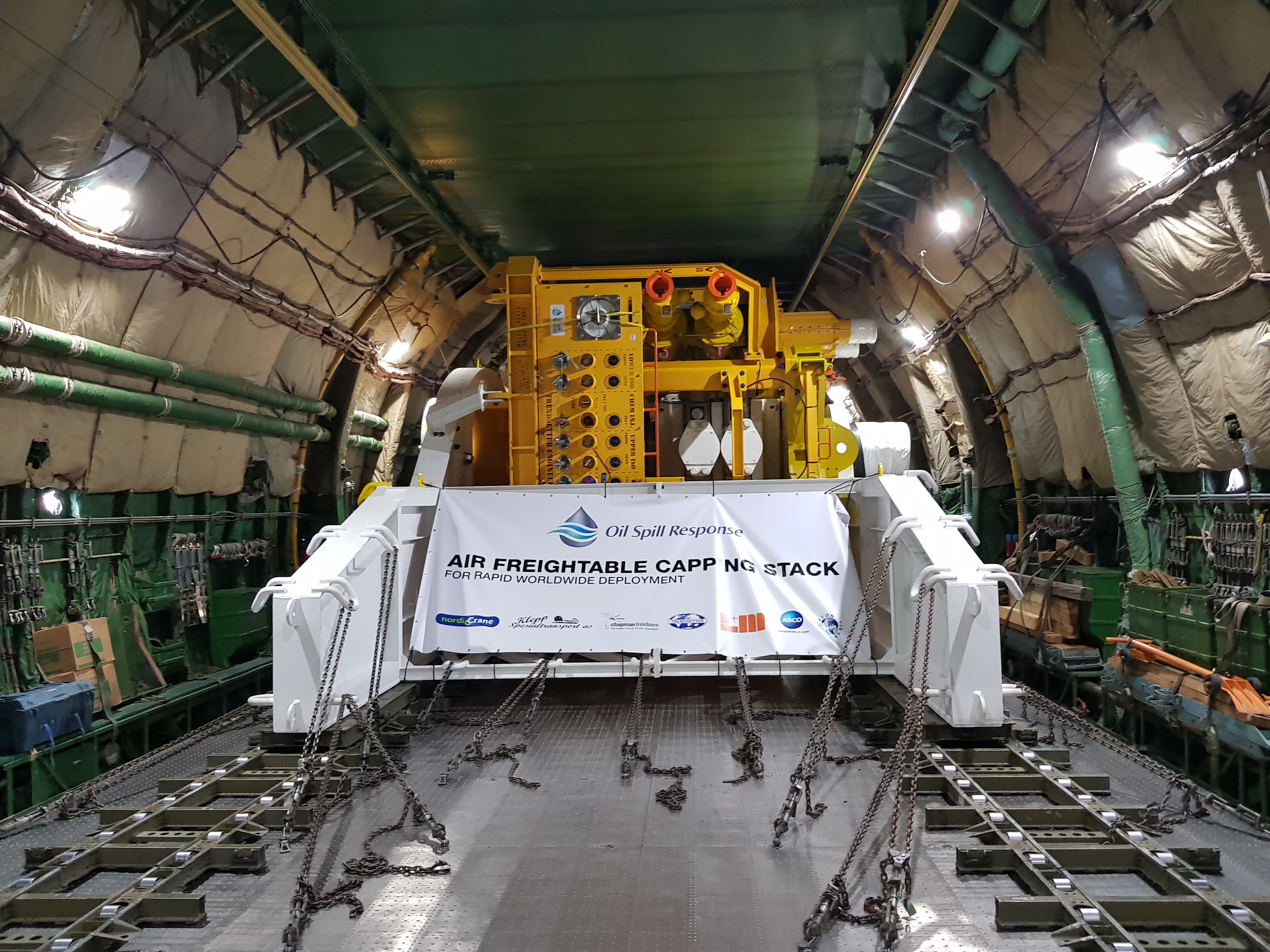 OSRL worked with Subscribers Technical Advisory Forum (STAF) to understand members’ requirements, looking at various options to reduce capping stack mobilization response times, including an assessment of existing alternative air freight capping stacks and new-build proposals. A STAF working group, led by BP, was established to investigate and develop the best technical solution for the AFCS project with OSRL. The recommendation from the STAF’s investigation conveyed that expediting mobilization of the existing best-in-class OSRL Capping stacks (developed under the industry Subsea Well Response Project (SWRP)) would be the preferred solution. Key for the members was the compatibility of the OSRL capping stacks with the extensive suite of tooling, including the Containment Solution and Offset Installation System, also offered through OSRL.

Commenting on the collaboration, Andrew Worrall, Senior Technical Specialist for BP Capping and Containment, said: “BP are delighted to have led the multi-operator workgroup in delivering a significant reduction of incident response times that the industry rightfully demands.”

After an extensive logistics study by Chapman Freeborn, looking at the members’ areas of operations, the AN-124 was chosen as the most suitable airframe due to its payload capacity (ability to travel up to 5,000km with a 120-tonne payload), self-loading / off-loading capabilities (alleviating airport deck loader capacity concerns) and availability on the European spot market.

To facilitate the movement of the capping stack in a single operation, OSRL worked with L+M to design and fabricate a bespoke frame, with support from Trendsetter as the original equipment manufacturer (OEM) for the capping stacks. Both Antonov Airlines and Volga Dnepr reviewed and approved the combined skid / capping stack design and physical load for flight. 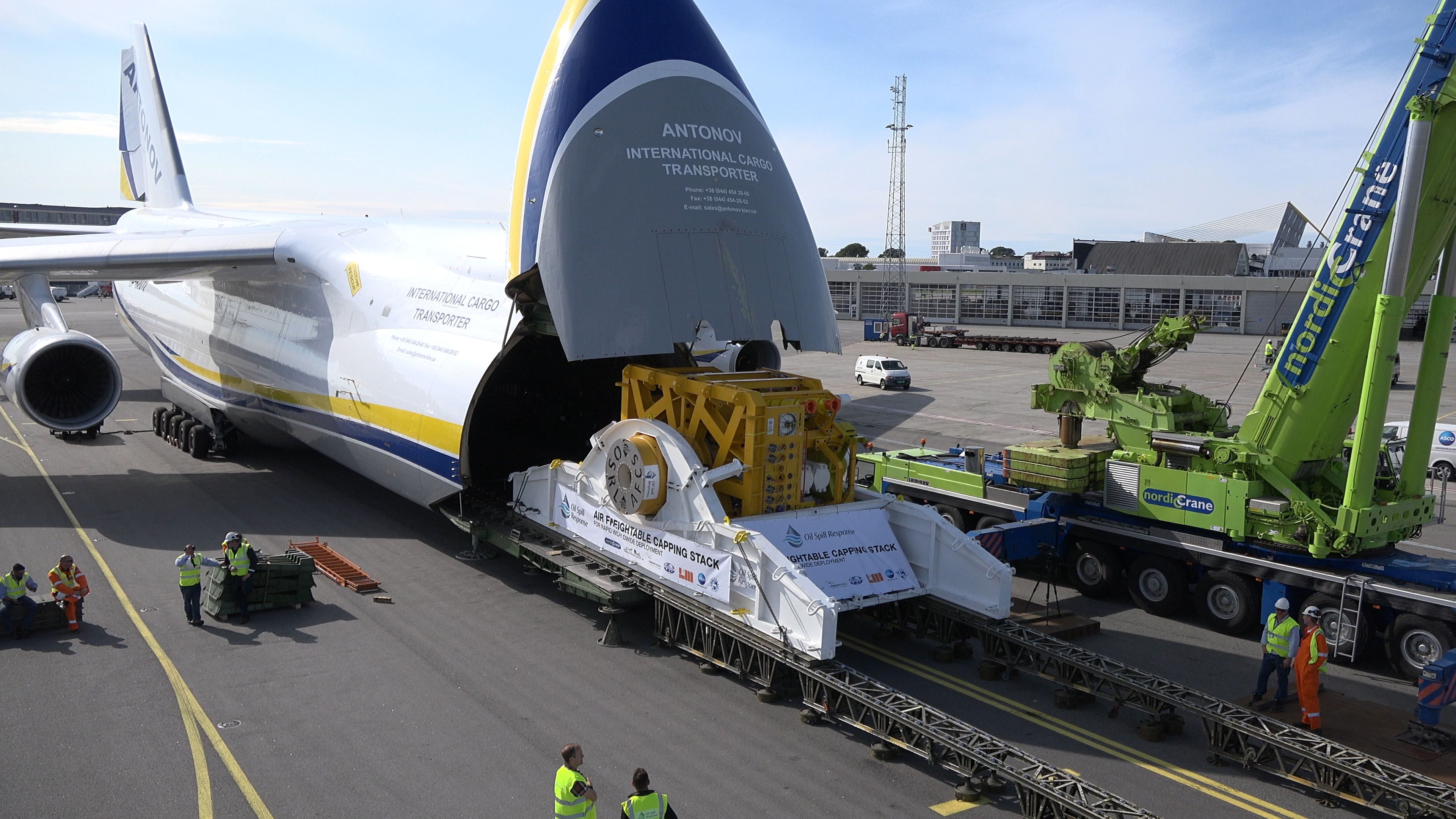 Prior to the successful mobilization exercise and test flight, which took place at Sola Airport, Stavanger, Norway (10 kilometers from OSRL’s base in Tananger), transporting the equipment by air would have required the 85-tonne capping stack to be broken down into multiple payloads, and delivered on several Boeing 747 (or equivalent) transport planes, before being reassembled at the destination location and moved to the incident site.

Chris Lund, Technical Manager for OSRL's SWIS team added: “When every minute counts, the number one priority is stopping the flow of hydrocarbons as quickly as possible. The ability to transport a fully assembled capping stack by air is a critical development for the industry. Sea transport remains the most likely mobilization option for the majority of well sites, which is why we have four capping stacks strategically located in key upstream regions – fully assembled at storage bases with direct quayside access. But for wells in more remote areas, and for members looking to secure drilling licenses in new or remote exploration locations, this is a vital addition to our subsea capping and containment offering.”

OSRL would like to thank all its partners in successful completion of the mobilization demonstration for industry; Antonov Airlines, Asco Norge AS, Chapman Freeborn, Klepp Special Transport, L+M, News on Request, Nordic Crane and Trendsetter Engineering.

Modus Unveils Next Generation Survey and

N-Sea Expands Service Capability in the