Digitizing the Coral Reef: You Can Only Protect What You Know 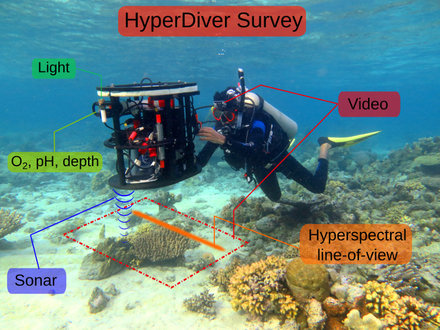 Climate change affects many parts of the world, bringing with it ocean acidification. Coral reefs are particularly vulnerable to the increasing acidification of the oceans. Now scientists from Bremen, Germany developed a new method to measure the status of coral reefs, in a more complete way than before. They present their system in a video.

Coral reefs are complex ecosystems with high biodiversity
Due to the complexity and biodiversity of coral reefs, surveying them is generally a complicated and expensive process and only a fraction of the reef could be covered. Now the physicist Arjun Chennu and Marine Biologist Joost den Haan from the Max Planck Institute in Bremen, Germany present a novel approach, by which they create detailed maps of the underwater reef landscape. Using novel camera technology and an intelligent computer algorithm, they demonstrate how a diver can survey the reef, analyze it and create a map of a large area of the reef in a comparatively short time.

With the HyperDiver system a diver can scan up to 40 square meters of the reef every minute. The spatial resolution is in the centimeter range. The large amount of data is analyzed by a self-learning program to create detailed maps of the seafloor. This is considerably faster and more comprehensive than conventional methods, in which trained divers must manually identify the reef organisms, which limits the extent of the reef that can be covered.

Comprehensive reef mapping
The researchers from the Max Planck Institute in Bremen have now successfully tested the new HyperDiver system in Papua New Guinea. The test site was a coral reef near to natural seeps of carbon dioxide. In the vicinity of these seeps, the coral reefs show signs of stress and damage: a natural ecosystem laboratory for the HyperDiver system to study the effect of Ocean Acidification on coral reefs..

"The novel development is the collection of underwater spectral images and the analysis by a computer program with a self-learning algorithm," explains Chennu. "We train the program to identify the reef organisms. This is similar to automated face recognition from video surveillance." His colleague Joost den Haan adds: "This technique allows us to create a visual map of the biodiversity of coral reefs. The more coral reefs we map, the better the system can distinguish the variety of coral species. Now it is possible to accurately detect the present condition of the reefs and to monitor any changes." The researchers are very satisfied with their first results. With the success of the pilot study, Chennu and den Haan hope that their system will soon be used worldwide towards the monitoring and protection of coral reefs. Here they present the HyperDiver technique in a short video.

UBC Research Indicates Only 4% of the Oc

The Ocean`s Twilight Zone can Feed the W

What Does It Take to Get Permits for a 1

NOAA and Liquid Robotics Collaborate to

What Lies Beneath: Bridging the Gap betw

What Would a ‘No-Deal’ Brexit Mean for t