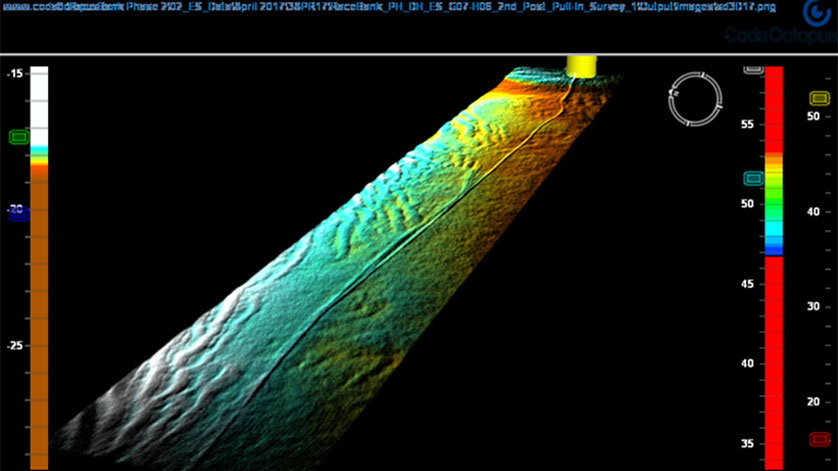 Coda Octopus is reporting the successful deployment of the Echoscope® real-time 3D sonar system on the Race Bank offshore wind farm project by DeepOcean. The Echoscope® was used for a vast number of tasks including live cable touch-down monitoring and position recording, monitoring of first and second end pull-ins, cable-cut marking and survey of the as-laid inter-array cables. 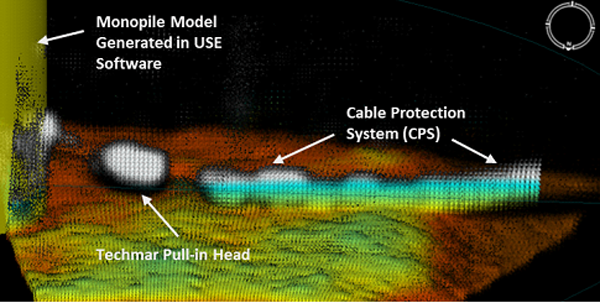 The First Phase of the Race Bank Project

Following extensive trials in early 2016, DeepOcean deployed the Echoscope® complete with Integrated Pan and Tilt dual axis rotator on the Deep Helder for the first phase of the Race Bank project in late 2016. DeepOcean required a system which could continuously generate images of the inter-array cable during installation irrespective of water visibility.

The Echoscope® is a real-time 3D volumetric imaging and mapping sonar, which generates 3D images instantly on the topsides software, Underwater Survey Explorer (USE). When coupled with an accurate RTK position and attitude sensor the Echoscope® can also be used as a hydrographic survey and mapping tool, providing instant bathymetric data without the requirement for post-processing. 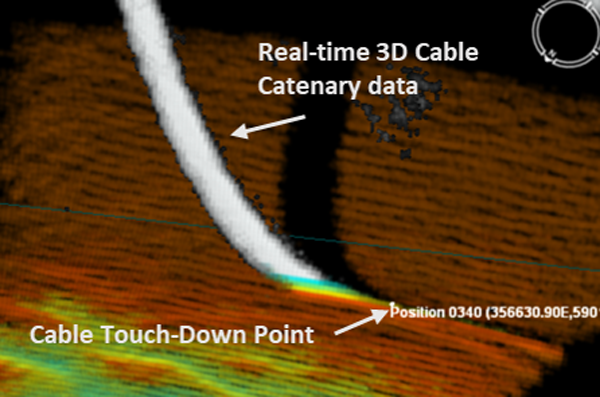 Initially, the primary task for the Echoscope® was to provide images of the cable during the first and second end pull-ins. The Echoscope® unique ability to generate real-time 3D data gave the installation teams a tool which enabled continuous monitoring of the cable, carrying out live measurements between the cable, the sea-bed and the monopole to ensure the pull-in operation could be completed safely and effectively without any risk of cable damage. The image of the cable was generated on the Coda Octopus software Underwater Survey Explorer on the Deep Helder and instantly transmitted to the cable installation vessel using an NCentric wireless link. This gave both the survey team on the Deep Helder and the installation team on the cable lay vessel access to the same real-time 3D information.

In addition to monitoring the cable during the pull-in process, the Echoscope® was used to monitor the cable touch-down position during the cable lay process. The touch-down point was recorded and output to the Deep Helder navigation platform, providing a real-time feed of the cable position. This removed any requirement to survey the as-laid position of the cable after installation, saving vessel time and cost. On the Race Bank project the team were able to benefit from the recent USE V7 software updates which included an improved measurement tool, improving the efficiency of the monitoring and recording operation.

Following successful completion of the first phase of the Race Bank project, the team re-deployed to the second phase of Race Bank where the same set-up was used. As the projects developed, the installation and survey teams relied less on the ROV supplied data, and more on the Echoscope® data. The Echoscope® was utilized on a range of additional tasks which included: providing cable cut-marker positions, as-laid cable surveys, structure and scour protection inspection, monitoring the quadrant during laydown, omega scan and correction and producing 3D volume rendered mapping of the as-laid cable.

Blair Cunningham, Coda Octopus President of Technology states: Offshore Wind projects rely on innovative technology to reduce the installation costs and deliver renewable energy at a competitive price for the consumer. DeepOcean’s successful use of the Echoscope® on the Race Bank and Bligh Bank projects has shown the versatility and wide range of tasks which can be completed with a single system, reducing reliance on ROVs, generating planning certainty and reducing cost for the project.