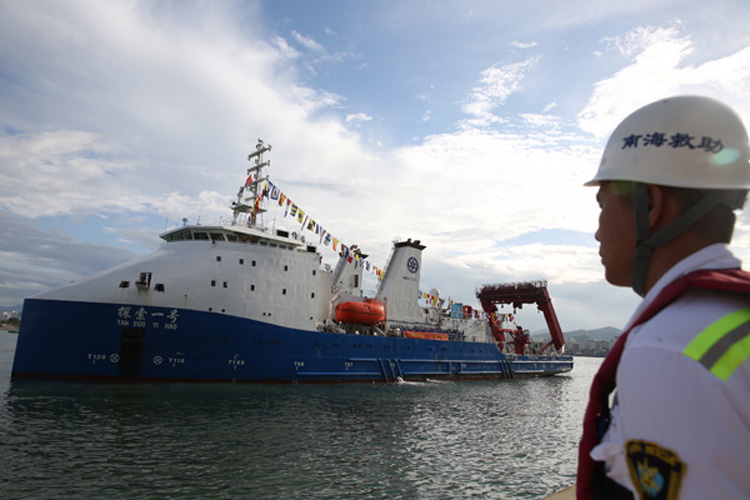 China is capable of exploring depths of 10,000 meters below the surface of the ocean after the Tan Suo Yi Hao, the mother ship of a 4,500-meter manned submersible, returned to her home port of Sanya, Hainan province, on Friday.

The vessel had just completed her maiden voyage, conducting deep-sea scientific investigations in the Mariana Trench, the Chinese Academy of Sciences said.

Tan Suo Yi Hao, the mother ship of a 4,500-meter manned submersible, returns to her home port of Sanya, Hainan province, on Friday after completing her maiden voyage. [Photo/Xinhua]

It is equipped with a number of laboratories, data processing and information centers, and other equipment. It serves as a base for the submersible, deep-sea expeditions and engineering.

The ship is the first of its kind in China, according to staff members at CAS' Institute of Deep-sea Science and Engineering. The ship, which is owned by the institute, had a crew of 60, including 39 researchers in different fields. It embarked on the voyage in June after undergoing 13 months of modifications.

During its 52-day mission, the vessel conducted 84 research projects in the Mariana Trench with the Chinese-developed Haidou ARV (autonomous and remotely operated vehicle), which is capable of diving to a depth of 11,000 meters, the Tianya and Haijiao deep-sea landers, an ocean floor seismometer and other appliances.

Liu Xincheng, the mission leader, said many valuable samples and data were collected at different depths during the voyage.

A report about the voyage will be published in Beijing after further study and analysis.

"It is the first time China has conducted explorations at 10,000 meters with domestically developed high-end deep-sea devices. It indicates that China has entered a new era in the field of marine science and technology," Bai Chunli, president of the Chinese Academy of Sciences, said.

At a ceremony held on Friday to celebrate the vessel's return to port, Wang Lu, Hainan's deputy governor, said the mission was a breakthrough that will further promote the development of China's deep-sea technology.

"It was a milestone for China in terms of deep-sea expeditions", Bai wrote in a congratulatory letter. (China Daily)