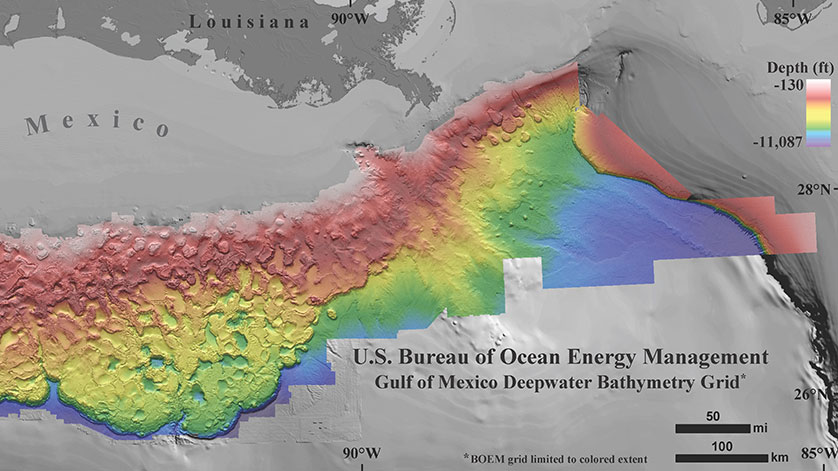 To create the grid the seafloor was interpreted on over one-hundred 3D seismic time-migrated surveys, then mosaicked together and converted to depth in feet. The grid consists of 1.4 billion, 40-by-40 ft defined cells covering water depths –130 to –11,087 ft (–40 to –3,379 m). The average error is calculated to be 1.3 percent of water depth.

BOEM has the responsibility of issuing permits for the acquisition of geophysical data in U.S. Federal waters as designated under the Outer Continental Shelf (OCS) Lands Act. Regulations at 30 CFR 551 allow BOEM to obtain a digital version of any post-processed, post-migrated two-dimensional (2D) and three-dimensional (3D) seismic survey acquired within the OCS. BOEM now maintains a confidential library of approximately 1,700 time and depth 2D/3D seismic surveys for the Gulf of Mexico (GOM), with survey vintages dating back to the early 1980s. These data provide our geoscientists a world-class repository of subsurface digital data to interpret and utilize in achieving our regulatory missions.

Since 1998, BOEM has used the largest, highest quality 3D time surveys to interpret the seafloor. Time surveys were used because the primary objective was not bathymetry but to identify seafloor acoustic amplitude anomalies indicative of authigenic carbonate hardgrounds and natural hydrocarbon seepage; those areas which may be suitable habitat for communities of chemosynthetic, coral, and other benthic organisms [Roberts, 1996, Roberts et al., 1992 and 2000]. The acoustic amplitude response of the seafloor is better resolved in time-migrated surveys rather than depth-migrated, allowing for increased accuracy in the identification of potential benthic habitats and seeps. While this new bathymetry grid does not include acoustic amplitude data for the seafloor, BOEM does publish polygon shapefiles which outline areas of anomalously high and low seafloor acoustic reflectivity, which can be downloaded here.