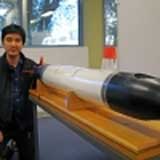 The AUV will be based at the college until December 2018 under an agreement with its owners, the Defense Science Technology Group.

“The Mullaya is a high-end research dedicated vehicle. It will allow us to explore control algorithms and hydrodynamic maneuvering characterization, which are often limited with commercial-based vehicles,” he said.

AUVs can be programmed to survey the underwater environment and collect scientific data on research missions.

The Mullaya is a torpedo-shaped, 1.5 meter-long aluminum robot that can operate in either remote (tethered) or autonomous (untethered) mode.

It is capable of exploring to a depth of 30 meters underwater at an average speed of 3 knots per hour for up to three hours at a time.

Construction has started on a new, world-class AUV Facility to centralize the research team and their resources and build upon AMC’s underwater robotic research capabilities.