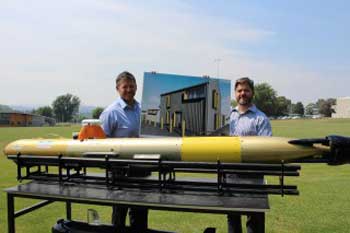 Building plans for a new $750,000 state-of-the-art facility set to position Tasmania as a world leader in underwater robotic technologies were revealed on February 10th.

AMC's autonomous underwater vehicle (AUV) facility in Tasmania will be home to a fleet of robots used to survey the ocean’s depths and collect scientific data on research missions.

AMC Principal Professor Neil Bose said the development would bring a range of social and economic benefits to the Launceston region.

“This is an exciting new development for AMC, the University and the state of Tasmania. It will be unique within Australia and one of just a handful of comparable facilities globally, allowing us to be on the cutting-edge of research in this field,” Professor Bose said.

“Building our underwater robotic research capabilities not only enhances our reputation on the international stage, it also helps stimulate the local economy through the recruitment of specialist personnel and the use of a local architectural firm and other related industries.”

"This facility will be a hub for world-class AUV research and technology. Through local and international collaborations, we aim to develop new data collection capabilities, improve reliability and increase autonomy of underwater vehicles," AUV Facility Coordinator Peter King said.

"One of these projects, the Antarctic Gateway Partnership, will see us acquire and develop an AUV that tackles the great engineering challenges of venturing far beneath ice-covered waters to further our understanding of the Antarctic’s role in the world's climate.”

The $24 million Antarctic Gateway Partnership is a Special Research Initiative of the Australian Research Council bringing together the University of Tasmania, CSIRO and the Australian Antarctic Division to build further polar research capability in Tasmania as a gateway for Antarctic research, education, innovation and logistics. The Antarctic Gateway Partnership has contributed $3.6 million in funding for the new AUV and four of the new staff positions, with a further $3.75 million and one staff position contributed by AMC.

Launceston firm Artas Architects were tasked with designing a facility big enough to accommodate the Antarctic Gateway Partnership AUV, which will measure up to 8 meters long, weigh 3 tons and be capable of transiting more than 100 kilometers while collecting data from the sea floor at depths of about 4000-5000m, and beneath ice shelves and sea ice.

"We've been able to take a simple storage area that was largely unused and convert it into a contemporary research facility utilizing modern building products. The design of the building, its color and materials, complements the other structures in the area while still maintaining its own identity," Mr. Clayton said.

Building works are expected to be completed in late 2016.