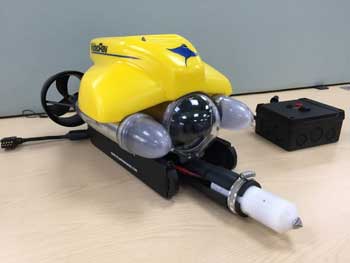 Atlantas Marine Ltd has made its first move into ROV instrumentation with the design and manufacture of a video overlay device intended to make cathodic protection surveys easier and faster. Presented for the first time at Oceanology International the new tool has been designed to display the readings obtained by a cathodic protection probe as an overlay on the ROV’s video display. This creates a permanent record and eliminates the need for the ROV operator to make handwritten notes of individual probe readings while surveying the condition of a vessel’s anodes.

The new CP video overlay tool is the result of many years of practical ROV operation by Atlantas Marine Ltd. In addition to being the world’s top agent for sales of VideoRay ROVs, the company also specialises in conducting underwater surveys for clients with its VideoRay and other observation class ROVs. Experience of the practical challenges of ROV operation and the company’s high level of in-house technical expertise has resulted in the development of this instrument which can enhance the capabilities of ROVs of any size.

The CP video overlay unit consists of a small black box that can be quickly and easily interfaced with the ROV’s cathodic measurement probe and the pilot’s video display. It is the answer to a practical problem that Atlantas Marine ROV operators had been grappling with for many years and it now enables them to give their undivided attention to the task of operating the ROV and its probe. When the ROV is driven forward against the hull or anode of a vessel the current reading obtained by its probe is traditionally displayed on a separate unit. From there it must be transcribed by the ROV pilot or an assistant in a way that enables the reading to be related to a specific anode. This can be a challenge if sea conditions are difficult or visibility is limited but with the CP data overlay it is no longer necessary. The reading obtained by the probe is shown as part of the ROV’s video display which is creating a permanent record of the dive. By reviewing the recording later it becomes possible to relate the data to the exact location in a way that efficiently avoids any mistakes or ambiguity.

Atlantas Marine is based in Yeovil, south-west England and has been selling small ROVs and providing survey services for over 15-years. In that time it has gained a wealth of experience that enables it to respond quickly and effectively to requests from customers anywhere in the world. This combination of practical experience and the technical competence needed to repair and maintain ROVs has almost made the development and manufacture of the CP Overlay an inevitable outcome.

Commenting on the development, Atlantas Marine managing director, Charlie Foll, sees it as an indication of the company’s growth potential. “We have been successfully supplying VideoRay ROVs for many years and the steady increase in the amount of survey and inspection work that we undertake has given us a detailed insight into the practicalities of ROV operation. Our engineering team is second to none so when we encounter a technical problem we are able to solve it ourselves. With this combination of skills I suppose it is a natural progression that we should start making our own tools. Normally the tools and instruments supplied for ROVs are manufactured by companies that specialise in making things at the direction of their customers. Being a manufacturer as well as an end-user puts our first product in a unique position and it is now probably just a question of time before we devise and present more ROV tools and accessories to the market.”