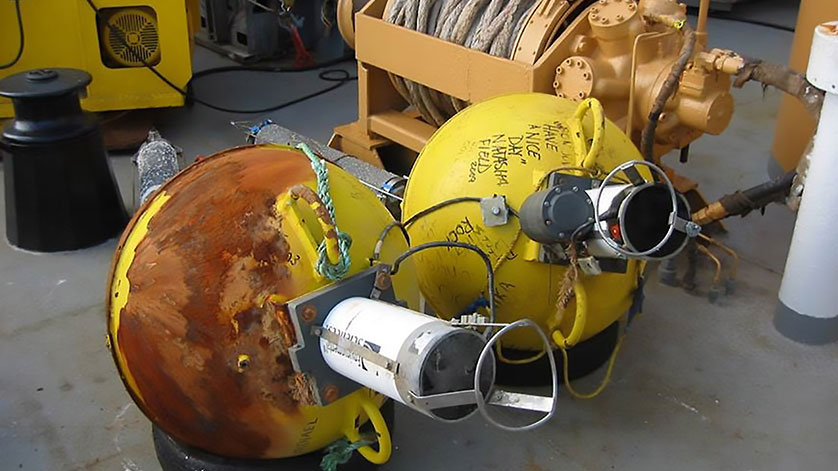 Dr. Andreas Muenchow and his PhD student Pat Ryan from the College of Earth, Ocean and Environment at the University of Delaware were involved in an international collaboration to measure the fresh water flux through Nares Strait from 2003-2012.

Nares Strait and Fram Strait are two of the main pathways for fresh water to exit the Arctic. The fresh water flux into the North Atlantic controls the amount of vertical stratification, and in turn the amount of deep water formation. This process has implications for ocean circulation, the transfer of heat from the tropics to the poles via ocean circulation, and in turn global climate.

To measure the fresh water flux due to ice, two IPS4 Ice Profilers were deployed in Nares Strait to obtain near-continuous measurements of ice draft from 2003 to 2012, with small periodic gaps for instrument maintenance. As Nares Strait remains ice infested through the summer, the IPS units had to run through every season. Of particular interest is the encounter these instruments had in 2010 with an ice island calved off of Petermann Glacier. The ice island was initially about 260 km2. The IPS units which had been nominally deployed at 75 m depth to reduce the risk of ice impact were struck on September 22, 2010, and were pushed down to about 90 m over a three hour interval. The ice island took approximately 11 hours in total to pass overhead of the instruments as it drifted by at an average speed of about 0.3 km/hour. During this passage, the IPS units sampled the range to the underside of the ice at three second intervals, and depth (below the sea surface), pitch and roll at one minute intervals. Besides bent transducer guards, the IPS units, shown in the picture, survived the encounter, and continue to make ice measurements for this team on other projects.

More can be learned about this project in a paper which Pat is currently submitting to the Journal of Geophysical Research.