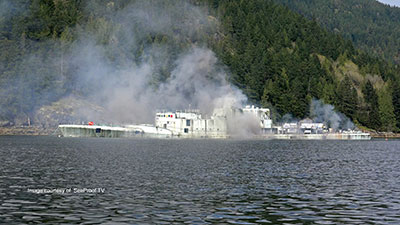 The Artificial Reef Society of British Columbia (ARSBC), a Canadian based nonprofit society that specializes in the creation of environmentally and economically sustainable artificial reefs, has announced the launch of a series of unique marine expeditions designed to validate the positive environmental impact of its artificial reef programs. The first expedition will focus on three important artificial reef sites: the former HMCS Annapolis, the M/V GB Church, and a Boeing 737 located in waters around Vancouver, British Columbia. Throughout the expeditions, the team will utilize Aquatica Submarines’ manned submersible the Stingray 500 as a scientific and media platform to monitor, document, survey, and capture imagery in real-time. Each dive mission will collect data to establish baseline information on the health of each reef site.

“This expedition will give us the chance to deliver undisputed evidence to confirm the net gain man-made reefs provide in the areas of limited natural complex marine habitat,” stated Howard Robins, President of the Artificial Reef Society of British Columbia. “There are still those who claim that reefing ships is nothing less than dumping garbage in the ocean, but this mission will demonstrate that the repurposing of surplus ships, derelict vessels or aircraft does provide benefits for successive generations of marine life.”

A valuable component of the expedition will be the creation of a documentary film library and photo gallery, which will visually reflect the success of artificial reef habitat, biodiversity, and biomass.

“We are excited that ARSBC chose Aquatic’s manned submersible, the Stingray 500 and our operations team to lead the expedition,” stated Harvey Flemming, President and CEO of Aquatica Submarines and Subsea Technology, Inc. “The Stingray 500 is a versatile platform that will allow filming, observation and data collection activities at depth. The one atmosphere, dry condition that only a submersible can provide, will allow us to extend our time down on each reef site and open up the expedition to a larger list of stakeholders and potential sponsors.”

As part of the expedition, ARSBC will invite experts from a wide range of industries to contribute, take part in, and become key drivers in shaping the future of artificial reefing projects and the expansion of ecologically sound, man-made marine habitats. Significant findings from the dives will be used to promote, quantify, and advance artificial reefing programs in Canada and around the world.

The first expedition is slated for late Fall 2016 and sponsorship is open. For more information on sponsor opportunities contact: hrobins@artficalreef.bc.ca.