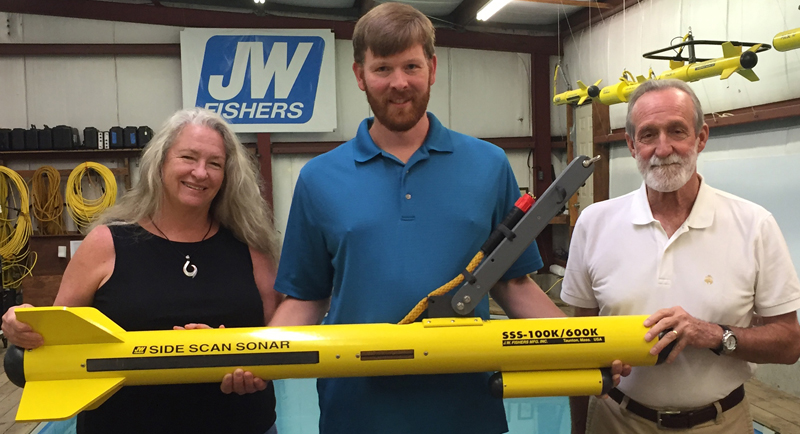 Many universities are adding or expanding their underwater archaeology program in an effort to give students a broader educational experience and a better understanding of our maritime history. The field of underwater archaeology is rapidly growing as more scientists and researchers learn to scuba dive, and the equipment required for marine exploration becomes more affordable.

Long Beach City College in California is one of the many institutions involved in these efforts. They recently added the Maritime Archaeology, Science and Technology (MAST) program led by Dr. Laurel Harrison Breece. She is a member of the Registry of Professional Archaeologists and visiting professor at UCLA’s Cotsen Institute of Archaeology. An accomplished diver, Breece earned degrees from UCLA from her work on the silver collection from the sunken city of Port Royal Jamaica and the Spanish colonization of Central America. She has worked on a number of high profiler projects with husband and colleague Dr. Bill Breece. “I am very excited about the new program and the opportunity it will offer students to both work in marine archaeology and operate the equipment used in these projects.” She choose JW Fishers Mfg. as the supplier for the needed equipment acquiring a sub bottom profiler, side scan sonar, magnetometer, underwater video system and metal detector. “I went with Fishers because we could get all of the gear from one source, and they offer free training.”

Another institution with an active marine archaeology program is the University of West Florida. Dr. Gregory Cook, an Assist Professor of Anthropology at the school, teaches Nautical and Shipwreck Archaeology. Like Breece, Cook is an avid diver and dedicated to the preservation of of submerged cultural resources. Past projects include the excavation of the Emanuel Point Ship in partnership with the Florida Bureau of Archaeological Research, and conducting remote sensing surveys along the Florida panhandle. To assist in these operations the university acquired JW Fishers Pulse 8X underwater metal detector and the Diver Mag 1 magnetometer. Cook also feels it is important for students to have the opportunity to use this equipment while they are learning. “Recently, in a maritime archaeological field school conducted in Pensacola Bay, my students used the Diver Mag to investigate magnetic anomalies we had previously discovered at a potential shipwreck site in Pensacola Bay. Young people today are so immersed in technology, and using high tech tools for marine archaeology gets them really excited about learning.”

The University of Rhode Island (URI) has an on-line Museum of Underwater Archaeology with information about shipwreck projects the school is involved in around the world. URI’s Dr. Bridget Buxton, an associate professor in the history department, specializes in ancient history and Mediterranean underwater archaeology. Buxton, an experienced scuba diver, has worked numerous projects with international partners including the Israel Antiquities Authority (IAA) and University of Zagreb in Croatia. One discovered wreck appears to be a famous lost warship from the Napoleonic siege of Acre in 1799, a ship historians have been trying to find for the last 50 years. Using their Pulse 8X metal detector the team recovered large copper nails, cannon balls, grapples, 18th century muskets, and other concretions. IAA divers later used the Pulse 8X to help recover a cache of more than 2,000 gold coins from an ancient shipwreck in the Mediterranean. Buxton now reports that one of her more recent projects could be “the most important Roman shipwreck discovery of the last 30 years”. On that site the 8X located “a big pocket of Roman coins and an antique engraved mirror.” Buxton has just returned to work the project; this time armed with Fishers MC-1 mini camera so she can make a video record of the next round of incredible finds.

Indiana University (IU) Bloomington has one of the oldest academic diving programs in the country. Professor Charles Beeker is the director of the school’s Office of Underwater Science and Educational Resources (USER) and has directed numerous shipwreck projects in the US and Caribbean. He is a pioneer in preserving wreck sites as underwater museums. One recent project was working the wreck of the Quedagh Merchant. The ship was reportedly captained by the pirate William Kidd and went down in 1669 off the coast of the Dominican Republic. The remains of the wreck now lie under 10 feet of warm, clear Caribbean water, with cannons an anchors scattered about in plain view. The location makes it ideal for in-depth archaeological study and the perfect place for students to put into practice the methods and techniques learned in the classroom. The tools the group relies on to assist in locating artifacts are JW Fishers Pulse 8X hand-held underwater metal detector and PT-1 pinpointing magnetometer.

In describing how his passion was ignited for this exciting and expanding field one student said, “Over the course of my undergraduate studies I became increasing interested in history and archaeology. Then one of my professors discussed the merits of underwater archaeology, and the whole notion of conducting archaeology underwater hit me like a freighter. Shipwrecks are commonplace throughout the world and I’m taking for granted the rich maritime heritage that surrounds me.” As IU’s Prof. Beeker so apply put it, “The students are our future. I want to know in 20 years from now, 50 years, 100 years, we still have these underwater sites. They have not been destroyed, but are living underwater museums protected for future generations. The passion and dedication of our students will help to ensure these sites are preserved.”

History of The Sea Through Geographical,

‘The Darkness Beckons’ The History and D