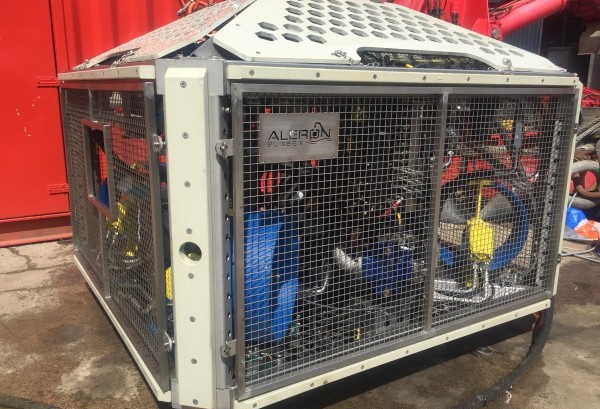 Earlier this year Aleron Subsea won a significant contract from a new client Fletcher Offshore for the design and manufacture of what is now referred to as their AUXROV system. Aleron Subsea had already produced a similar system based on the conversion of an XL with a 20ton through frame to accommodate underslung hydraulic grabs so the new contract award was taking their current knowledge and transferring it to a multipurpose system built around the current contract requirements and future proofing the system for new applications.

The resulting product; a multi-purpose AUXROV system that was initially to be used for boulder clearance in wind farm operations is also highly capable of delivering large amounts of flow and pressure from its 200HP dual HPU system to any tool that the client wishes to use. Some of the identified applications include; Clam Shells, Mass Flow Excavation tools, Shear Cutters, Diamond Wire Cutters, Survey Skids, multipurpose tracked skids. The AUXROV is comprised of components all rated to 3000m but has the ability to be uprated to 6000m from changing a couple of the PCB boards so there is a vast range of applications where the system can be beneficial in delivering “at tool” electronic and hydraulic power to subsea tools.

The system also runs a vast range of Subsea Sensors through its LINK Mux system which offers 12 x RS232, 12 x RS484, 4 x Gigabit Ethernet and 6 video channels as standard. Additionally, through the main control board we have the ability to take 16 analogue inputs meaning all sonars, profilers, cable trackers and standard ROV sensors can be run through the system and fed into the control van through the control software. All of these are upgradeable through additional modules.

Aleron Subsea’s Gladiator ROV control system was installed in the system and customised for the application providing an easy to use, simplistic control package. A pilot’s chair, flying joystick and touch screen control pad was installed in the control van providing control within close reach of the pilot with a six screen video wall displaying the system control alerts on the flying page along with camera and sonar data. A control system which is also capable of being used to upgrade any ROV.