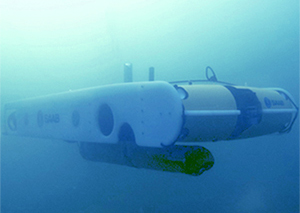 Eni consolidates its commitment to the development and adoption of the most advanced technologies to support a more environmentally friendly, safe and efficient conduct of its Oil & Gas activities.

Its key element is an AUV (Autonomous Underwater Vehicle), a sophisticated device conceptually similar to a drone (unmanned aircraft). The main characteristics of AUVs are their ability to move and operate in any submarine environment, independently, noiselessly, without a physical connection to the surface and with minimal logistical support. Like drones, also AUVs were created and developed by the military, but their use is rapidly extending to a number of other areas, such as science and industry.

Because of their ability to move independently, AUVs open up opportunities for their adoption in situations where traditional techniques, based on ROVs (Remotely Operated Vehicles), might prove difficult if not entirely impractical.

A traditional ROV system is intrinsically based on the existence of a physical connection between it and a ship on the surface through which launch, recovery and operations are managed. The connection allows the ROV to receive all the required electrical power, to send the collected data and to receive orders by means of one or more cables. The surface ship is positioned above the area in which submarine operations are carried out and hosts one or more specialists who can manipulate the underwater vehicle on the basis of photos and video transmitted in real time by the ROV itself.

Unfortunately, such operations can not be performed in adverse marine conditions, especially if the sea surface is iced. An approach based on an AUV instead, without any need of direct connection with the surface, may act independently of marine conditions or frozen sea surface, albeit with some limitations due to the current technology available. In particular, power is supplied by batteries (which guarantee energy independence in the order of tens of hours), while all the information coming from the sensors and devices installed must be managed directly by the control system of the AUV (and not by the operator) for the correct execution of navigation operations. The artificial intelligence of such AUVs needs to be able to compensate - within acceptable limits - for the absence of the operator: autonomous movement, the avoidance of obstacles and the advanced management of unexpected conditions are examples of characteristics that an AUV should own.