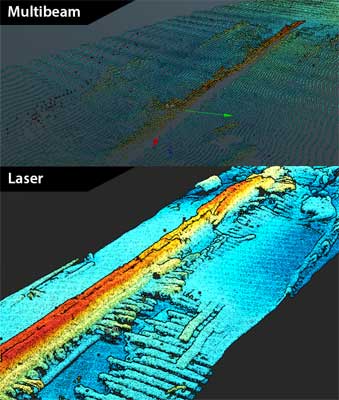 2G Robotics’ newest underwater inspection system, the ULS-500 PRO laser scanner with stills imaging camera and subsea light, was attached to a frame mounted to NOAA’s vessel, the Storm. DGPS was used for navigation data and a POS MV and PHINS INS were used for positioning. To assist further with positioning, the ULS-500 PRO was integrated with the survey and navigation software, EIVA NaviSuite, provided and operated by OARS.

Kevin Tomanka, Senior Hydrographer and Data Processor at OARS, noted: “The ULS-500 PRO interfaces just like any other Multibeam Echosounder in EIVA NaviScan. The software also supports multi-head systems so you can run a multibeam and a 2G laser simultaneously.”

As the Storm traversed the waters above the wrecks, the ULS-500 PRO dynamically captured data. The three high-profile wrecks the team documented were the Monohansett, Ogarita, and Haltiner Barge. The ULS-500 PRO generated detailed, to-scale, dimensional records of these sites, helping to accurately document America’s maritime history and heritage.

In particular, detailed dimensional data of the Ogarita had never previously been captured due to resolution limitations of traditional sonar and acoustic technologies. The high density data capturing capabilities of the ULS-500 PRO, however, enabled fine-scale dimensional features of the Ogarita to finally be resolved.

While the ULS-500 PRO captured laser data, 2G Robotics’ SeaShot Imager and SeaShot LED captured and seamlessly interlaced still images between laser profiles. The SeaShot Imager is a scientific stills camera that captures images at the highest quantum efficiency with ultra HD resolution. With the SeaShot Imager there is no image compression or pixel binning, which is common with other subsea cameras, so there is no reduction in resolution or loss of megapixels. Using the stills captured by the SeaShot Imager, mosaics of the wrecks were able to be assembled.

Tomanka stated: “This trial was a great example of how the ULS-500 operates in a vessel-based or hull-mounted or pole -mounted' setup. The data collected was relatively clean and usable with very little point editing needed. We found that the laser data is very dense and that at standard survey speeds of 4-5 knots the ULS-500 PRO captures over 6500 points per square meter. An amazing amount of data.”

NOAA and 2G Robotics previously collaborated in early 2014 to perform stationary scans of the Monohansett shipwreck at the Thunder Bay National Marine Sanctuary using the standard ULS-500. The scans generated by the scanner provided detailed 3D archaeological records of the site and afforded a more in-depth understanding of the wreck, revealing previously unnoticed features.

"Our successful collaborations with 2G Robotics have had a significant impact on the way the sanctuary now thinks about documenting the nearly 100 historic shipwrecks under our stewardship,” said Russ Green, Deputy Superintendent at Thunder Bay National Marine Sanctuary. “The efficiency with which laser scanning can precisely map sites is impressive, and the products nicely serve both our archaeological, resource management, and public interpretation goals. It’s a technology we aim to increasingly integrate into our research and resource protection plans.”

“Delivering thousands of points per square meter, the 2G Robotics ULS-500 PRO sets a new benchmark for data density and quality” said Tomanka. “Similar to the advent of Multibeam Echosounders into mainstream usage over the last few decades, it is clear that laser point data combined with digital still images will be the new standard for high-resolution seabed mapping going forward.”