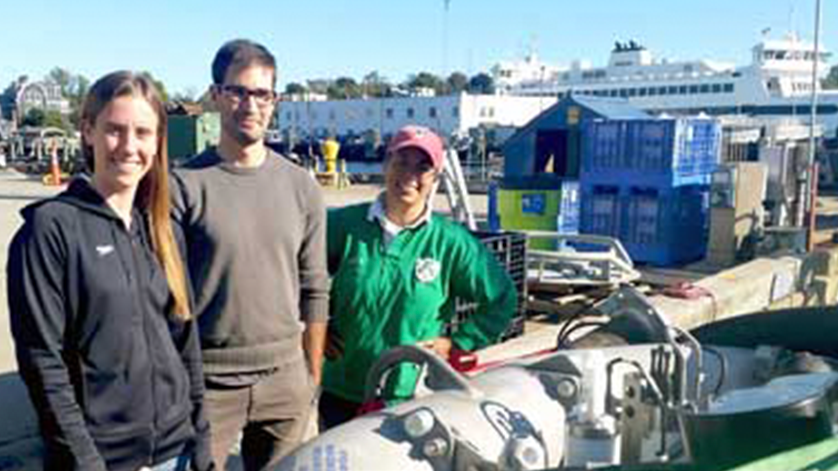 ASL Environmental Sciences Inc. (ASL) supplied the last of the Un-Cabled Bio-acoustic Sonar Instruments for the National Science Foundation-funded Ocean Observatories Initiative (OOI) Coastal and Global Scale Nodes in June 2016. Under the terms of the contract, ASL supplied 16 Acoustic Zooplankton and Fish Profiler (AZFP) instruments for the Coastal Arrays and 20 individual instruments for the Global Arrays. The two Coastal Arrays use a single bottom mounted instrument while the four Global Arrays use one upward looking and one downward looking instrument mounted on the mid-water platform of the Apex Profiler Mooring.

Figure 1 shows part of the OOI Woods Hole Oceanographic Institution (WHOI) team in front of Multi-Function Node (MFN) bottom frame destined for the Coastal Pioneer Array, about 80 miles off Martha's Vineyard, Mass., at the edge of the continent shelf. The MFN holds a variety of chemical, biological and physical oceanographic sensors including an Acoustic Doppler Current Profiler, CTD sensor, Oxygen sensor and CO2 sensor. The acoustic transducers for the internally-powered, internally-recording AZFP echosounder with 38, 125, 200 and 455 kHz channels are shown in the lower right of the picture.

In the fall of 2015, 7 AZFPs instruments which had been deployed on the Coastal Arrays were returned to the factory for calibration verification by WHOI and Oregon State University (OSU). All 7 instruments had a 100% data recovery rate and a minor adjustment was made on the acoustic calibration of one channel of one of the instruments.

In 2016, the first AZFP instruments with 38, 70, 125, and 200 kHz channels will be deployed on the Global Arrays. These include the Argentine Basin, Station Papa, Irminger Sea, and Southern Ocean Arrays.