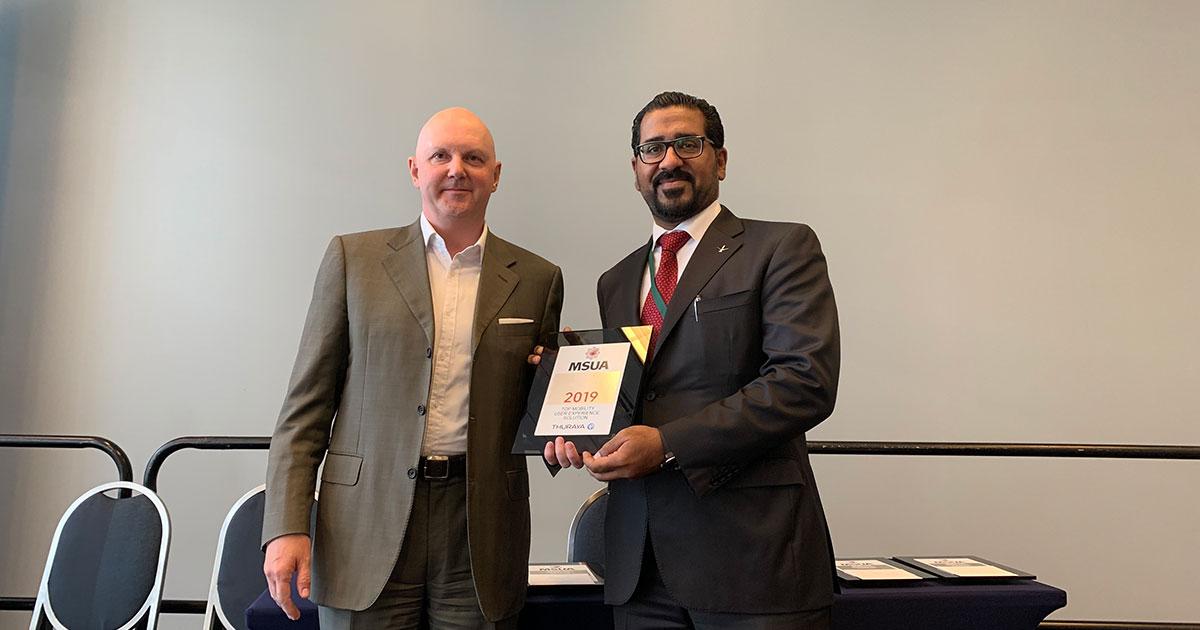 Thuraya Telecommunications Company, a subsidiary of Al Yah Satellite Communications Company (Yahsat), has won the Top Mobility User Experience Solution at this year’s Mobile Satellite Innovation award organized by Mobile Satellite Users Association (MSUA). The accolade was won by the Thuraya’s X5-Touch device – the world’s smartest and most innovative satellite phone. The announcement was made during the company’s participation at the Satellite 2019 Conference in Washington DC, US.

The Top Mobility User Experience Solution award recognizes the X5-Touch’s superior usability, as well as its market-leading status, which is underpinned by a series of category-firsts. The X5-Touch is the first satellite phone to run on the Android operating system – a fundamental pillar of its award-winning flexibility and user experience.

The operating system provides users with a multitude of apps on purchase, while developers gain the freedom to develop and customize bespoke apps to meet the unique needs of device users. This complements the ‘bring your own application’ (BYOA) concept, where customers can download any app of their choice.

An unrivalled 5.2-inch HD touchscreen protected by a rugged Gorilla® glass display, front and rear camera, and high-capacity battery bring everyday smartphone functionality to the remote environments of satellite communication. Meanwhile, the X5-Touch’s omni-directional satellite antenna ensures uninterrupted communications in more than 160 countries, including a number across Africa, Asia, Australia, and Europe. In addition, full dual-mode and dual-SIM capabilities provide the flexibility to effortlessly switch between satellite and terrestrial networks.

A host of crucial safety features such as advanced navigation and tracking functions, alongside a built-in SOS button, reinforce the X5-Touch’s credentials as a device built for the most remote and testing environments.

“Congratulations to all at Thuraya for securing today’s award, which is testament to the inventive mindset we encourage at every level of our organization,” commented Ali Al Hashemi, Thuraya CEO. “Our customers rely on dependable communications to do their job and, in many cases, remain safely connected in remote environments. With this award, the X5-Touch continues to reinforce its credentials for the most demanding of users.”

The MSUA accolade isn’t the first to be awarded by the association to Thuraya. In 2017 the company’s XT-PRO DUAL device won the Top Land Mobility Satcom Innovation Award for a second year, after landing the same title in 2014. Also in 2014, Thuraya’s SatSleeve product – which converts a smartphone into a satellite phone – received MSUA’s Innovator Award.

“Through the design and functionality of the X5-Touch, we set out to create a device that felt as natural and effortless to use as our personal smartphones, but with added ruggedness,” commented Shawkat Ahmed, Thuraya’s Chief Commercial Officer. “Usability is in many ways more important in remote and testing environments than it is elsewhere, and as this award demonstrates, the X5-Touch provides fast, simple and trusted connectivity wherever users venture.”

The Thuraya X5-Touch launched in November 2018 with a high-profile promotional campaign that included digital display advertising in Times Square, New York City. Just four months earlier, Thuraya and Yahsat announced an agreement that saw Yahsat acquire a majority and controlling stake in Thuraya. The agreement enabled Thuraya to significantly expand Yahsat’s satellite solutions portfolio on both commercial and government fronts, while creating a strong platform to capture the growing opportunity around IoT and M2M applications across both sectors.