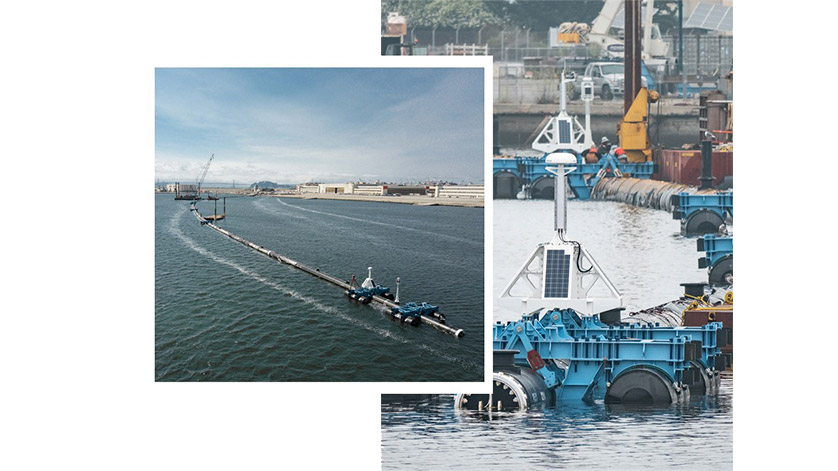 Iridium Communications Inc. announces that it has been selected as the preferred provider of satellite communications services for The Ocean Cleanup, the non-profit organization deploying advanced technologies to rid the world’s oceans of plastic.

The Ocean Cleanup is embarking on one of the largest environmental initiatives of this generation by cleaning up ocean plastic debris, starting with what’s known as the Great Pacific Garbage Patch. The Ocean Cleanup has chosen Iridium L-band satellite broadband services to support this important mission. The service is being delivered in partnership with Iridium service provider The AST Group.

By creating a system of 600-meter-long floating plastic collectors (floating screens, orsystems) that include a 3-meter-deep skirt, The Ocean Cleanup collects plastic pollution through a combination of the wind, waves, natural ocean currents and the floating screen’s ability to prevent plastic escaping underneath it, or flowing over the top, while avoiding to ensnare sea life. Each system is equipped with two Iridium broadband terminals, and upon full deployment of a fleet of 60 floating screens, there will be 120 Iridium broadband terminals operating as part of this project. The Iridium terminals will be relaying critical systems data including compartment flood detection, position and location information, pictures, 360 degree video and system performance information.

“The opportunity to play a role in such an important and historic endeavor was a no-brainer for Iridium. It’s an honor for us to be a part of The Ocean Cleanup’s incredible mission to rid the oceans of plastics,” said Iridium CEO Matt Desch. “A reliable, predictable and redundant communication network, that can work despite adverse weather conditions is critically important to this system, and that’s when the Iridium network really shines. When the oceans aren’t cooperating and several foot waves and powerful winds are causing havoc, the Iridium system will help make sure The Ocean Cleanup understands the operational status of each floating screen in the fleet.”

The Iridium broadband terminals will receive data from a complex combination of sensors and data gathering equipment hosted by each system. That information will then be relayed to The Ocean Cleanup’s headquarters in Rotterdam in real-time. Iridium’s unique constellation of 66 interconnected low-earth orbit (LEO) satellites requires no local ground infrastructure and provides the robustness, reliability and redundancy needed to ensure this critical data is delivered as expected.

For more information about The Ocean Cleanup, click here.