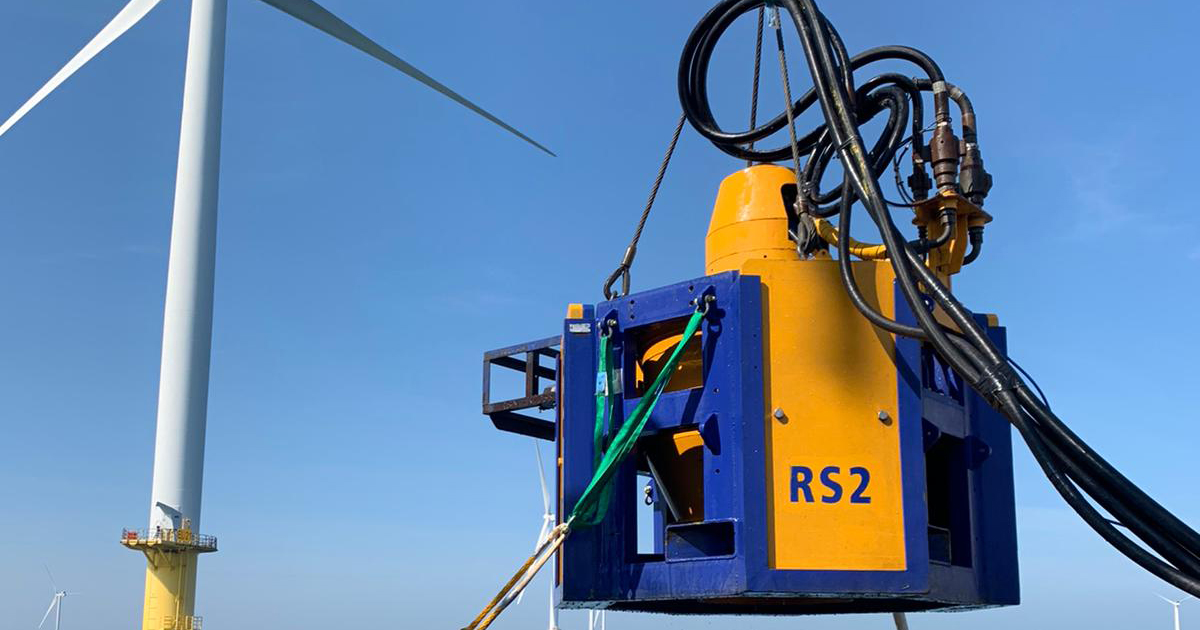 Subsea excavation and trenching pioneer, Rotech Subsea, has completed a programme of cable IRM works at a key offshore wind farm in the Netherlands. Commissioned by a European subsea service provider, Rotech’s RS2 CFE (controlled flow excavation) tool from its industry-leading RS range of trenching and excavation equipment was mobilised from Aberdeen in Q3, 2021. The cable repair operations saw the RS2 de-bury approximately 800m of existing cable before carrying out the burial of new cable, with a September 2021 completion date.

The de-burial phase saw the RS2 deployed from the RS Sentinel vessel using the ship’s crane. Operating in water depths of 25m the cable was successfully de-buried from 1.64 – 2.2m below the seabed. Soil conditions were medium-dense to dense sand with currents reported at 0.2 – 1.8kts and general sea states 0 – 2m. The state-of-the-art RS2 suspended jet trencher operated at a distance of 3 – 4m above seabed, progressing at 3 – 5m/min.

The cable burial saw the RS2 mobilised on the CLV Elektron, deployed from the ship’s crane. Forward and aft Dyneema Rope tuggers were used for stability during operations. The RS2 tool operated at 3 – 4m above seabed with the cable lowered to client specification of 1.5 – 2m below seabed level.

“Yet another successfully completed scope of work - completed on schedule and on budget - confirms Rotech Subsea’s cutting edge RS CFE suite of tools as the method of choice for cable trenching in the European offshore wind sector. With yet more innovations due to be unveiled to the market in early 2022, our RS tools are providing deeper, narrower trenches than ever before, with progress rates more than double that of competing Mass Flow Excavation tools.”

Aberdeen-based Rotech Subsea’s in-house research, development and engineering team has created a suite of 14 non-contact Controlled Flow Excavation (CFE), Suspended Jet Trenching tools which are in demand across Asia, the Americas, Australia, Europe and the Middle East. Further game changing enhancements to CFE and related subsea services are soon to be unveiled.