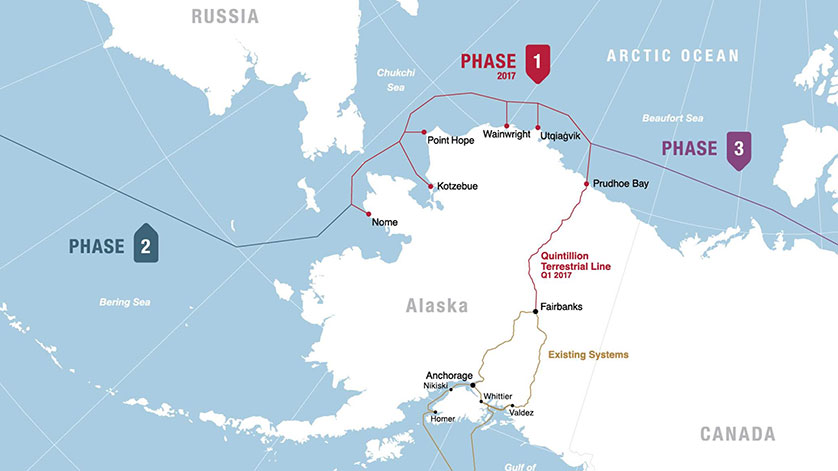 Crews aboard the Alcatel Submarine Networks’ C/V Ile de Batz installed the last segment of cable beneath the ocean floor, completing physical installation of the Alaska portion of the international Quintillion Subsea Cable System. The system is on schedule to be in service this December, enabling 21st Century communications in the North American Arctic for the first time.

The Alaska portion will deliver gigabit and higher bandwidth services on a 1,400 mile subsea and terrestrial fiber optic network, including a subsea trunk line from Prudhoe Bay to Nome with branching lines to Utqiaġvik, Wainwright, Point Hope, and Kotzebue. Most of the installation occurred last year. Crews were back on the water this summer adding resiliency to the system and installing the last 40 miles of cable.

The portion of the system installed in 2016 has been operating in test mode since last November and was closely monitored over the winter and during the critical spring ice break season. The installation has operated perfectly through this test period and we look forward to completing system testing activities prior to commercial launch this December.

In addition, Quintillion’s new terrestrial fiber has been installed between Fairbanks and Prudhoe Bay that connect these northern Alaska communities to the Pacific Northwest, as well as serve the Prudhoe Bay oil fields. This terrestrial system was launched and has been providing commercial service since last spring. The three phase Quintillion Subsea Cable System is ultimately intended to connect Asia to Western Europe via the southern portion of the Northwest Passage through the Alaska and Canadian Arctic.

“Completing the Alaska phase is a significant step for our groundbreaking project,” said George M Tronsrue III, Quintillion’s Interim CEO. “Our team overcame considerable challenges, including operating in a short, harsh and unpredictable Arctic construction season. We’re proud of our work and what it will mean to these Alaska communities.”

“Our mission is to deliver the same capacity to our Alaska markets the rest of the US has enjoyed for the past two decades,” said Tronsrue. “We believe this will drive new growth and innovation, and enhance education, medicine and other essential services.”