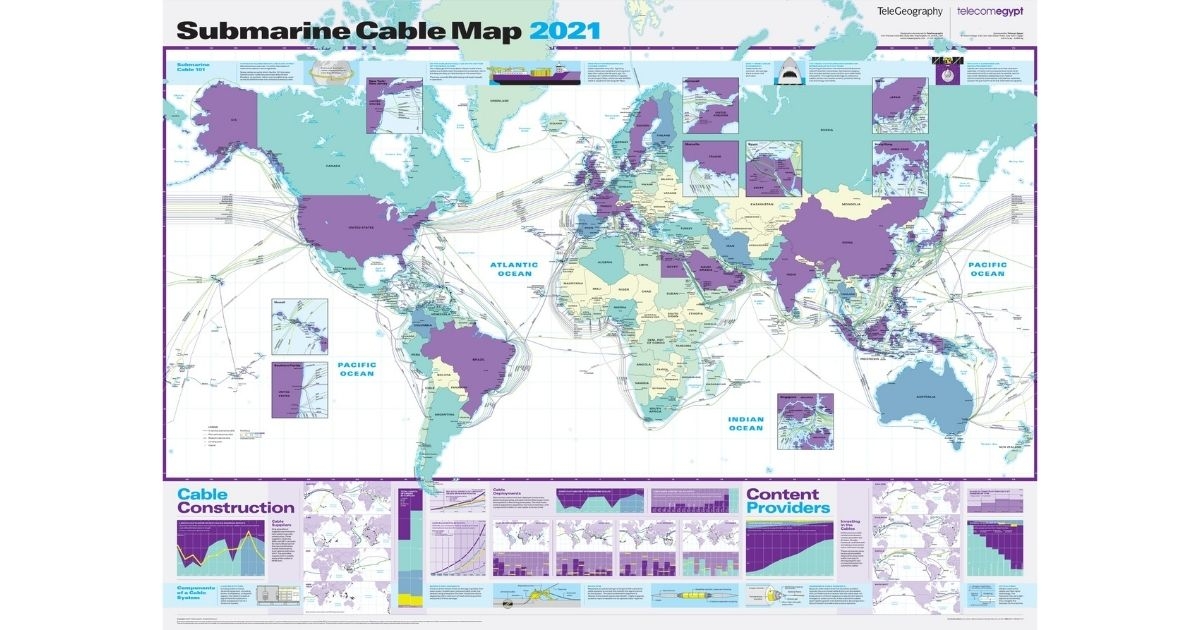 The map visualizes 464 global cables and 1,245 landing stations, as well as major future deployments. The map further analyzes the changing dynamics in the market and influence of new players on submarine cable investments.

Having accounted for less than 10% prior to 2012, content providers’ share of total capacity surged to 66% in 2020. Unlike previous cable construction booms, content providers like Amazon, Google, Facebook, and Microsoft are taking a more active role in the submarine cable market. These companies alone have such incredible demand for data center traffic that they’re driving projects and route prioritization for submarine cable systems. Google alone has more than 15 subsea cable investments globally.

“We’re excited to launch our latest Submarine Cable Map and would like to thank Telecom Egypt for supporting it this year. The 2021 map illustrates a market that’s experiencing more deployments, with new and diverse players. Over the last decade, we’ve seen content providers emerge as disruptors, ramping up investments to meet global demand for their services,” said TeleGeography Research Director Alan Mauldin. “The submarine cable market has never been so dynamic and we’re thrilled to showcase our data and analysis on all things subsea cable.”

There is no shortage of cable facts hidden throughout this map. Take this stat, for example: there are over 1.3 million km of submarine cables spanning the globe, which would wrap around Earth more than 30 times end-to-end. Of the 464 cables displayed in this 2021 edition of this map, 428 are active and 36 are planned. Out of these planned cables, 19 are brand new to TeleGeography’s map, boasting a combined length 103,348 km.

New subsea cables have been deployed across every global route grouping, with more systems expected in the coming three years. The Intra-Asian route is expected to experience the most investment, with a projected $1.6 billion in new cables to be launched.

TeleGeography’s Submarine Cable Map is available to order as a physical art piece or to explore as an interactive version reference. View the interactive map here.