NEC Begins Construction of Links to Palau, Yap and Chuuk 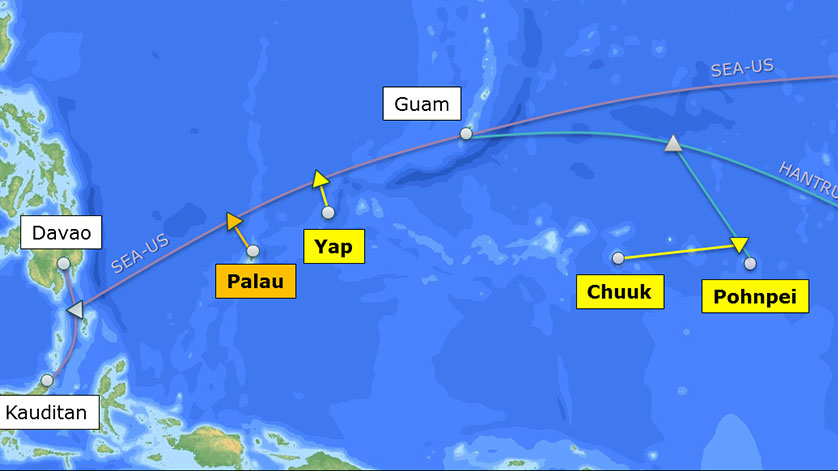 NEC Corporation, together with Belau Submarine Cable Corporation (BSCC; Republic of Palau) and the Government of the Federated States of Micronesia (FSM), has commenced construction of three submarine cable links that will connect the islands of Palau, Yap and Chuuk to the rest of the world.

The spurs to Palau and Yap both interconnect with the SEA-US cable (under construction by NEC, connecting the Philippines and Indonesia to the west coast of the United States via Guam and Hawaii). The extension from Pohnpei, the capital of FSM, to Chuuk branches out of another existing cable linking FSM, the Marshall Islands and Guam. All three routes feature transmission speeds of 100 Gigabit per second (Gbps) per channel.

“Palau has seen the need for a submarine cable for many years, recognizing the many national and economic benefits such facilities bring,” said George Rechucher, Chairman of the Board for BSCC. “However, the scope for a cost-effective connection for Palau was limited until the SEA-US cable was contracted, SEA-US being a major submarine cable express route passing close to the shores of Palau. With the unique opportunity provided by the SEA-US cable, co-operation with our customers, the Palau ICT Service Providers, and funding support from ADB, Palau will now be able to secure abundant capacity to the world and enable broadband Internet access in Palau with better quality and at reduced prices.”

“FSM has adopted a national policy to connect all four FSM states (Yap, Chuuk, Pohnpei, and Kosrae) with fiber optic cable systems. In 2009, the HANTRU-1 cable system landed in the state of Pohnpei. With the WB grant funded project that became effective in March 2015, and through FSM’s collaboration and partnership with Palau and SEA-US, FSM is now on the cusp of securing cable connections to all of the FSM states,” said Department of Transportation, Communication & Infrastructure (DTCI) Secretary Lukner B. Weilbacher. “By the completion of this project, service providers in the FSM will be able to offer broadband connectivity to virtually the entire population of the FSM at competitive prices. The impact of this project cannot be underestimated, as it will provide the core infrastructure and services that will be a foundation for future development.”

“NEC is honored to have been selected as a partner for this significant project for the Republic of Palau and the Federated States of Micronesia, addressing the needs for faster connectivity throughout the island nations,” said Toru Kawauchi, General Manager and head of the Submarine Network Division at NEC Corporation. “We take pride in delivering these new optical links to communities which had been dependent on satellite communications until now. We are confident these new extensions will contribute to improving the quality of life to those living in and traveling to these islands.”