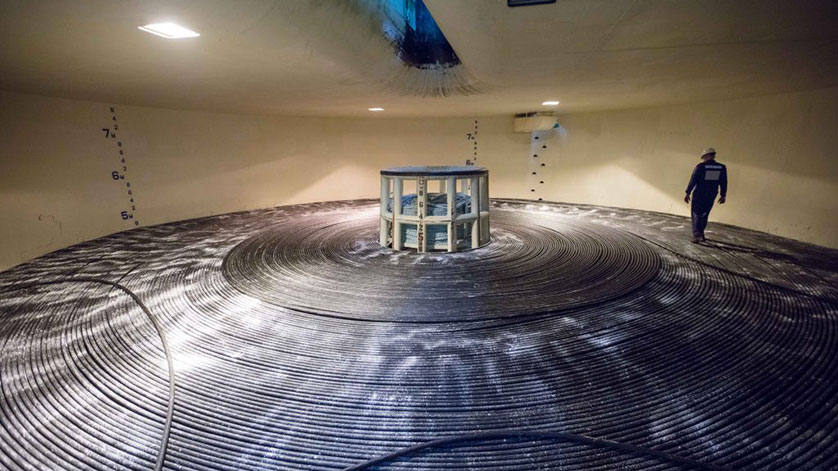 People and organizations rely on global networks every day to provide access to internet and cloud technology. Those systems enable tasks both simple and complex, from uploading photos and searching webpages to conducting banking transactions and managing air-travel logistics. Most people are aware of their daily dependency on the internet, but few understand the critical role played by the subsea networks spanning the planet in providing that connectivity.

The importance of those networks was underscored when Hurricane Sandy hit the East Coast of the U.S. in October 2012. The superstorm devastated coastal communities, caused billions of dollars in damage and shut down wireless, internet and home phone service for days. Flooding knocked out servers, shut down websites and disrupted connectivity across sectors, from electronic trading to online media, affecting transatlantic communications connecting some of the world’s largest economies.

“It was a major disruption,” says Frank Rey, director of global network strategy for Microsoft’s Cloud Infrastructure and Operations division. “The entire network between North America and Europe was isolated for a number of hours. For us, the storm brought to light a potential challenge in the consolidation of transatlantic cables that all landed in New York and New Jersey.”

The superstorm sparked the realization that another major event could disrupt the vital connectivity lifeline across the Atlantic. As part of its ongoing efforts to drive innovation and expand capacity of its global network, Microsoft sought options for making transatlantic connections more resilient, and became aware that Facebook leaders shared a similar perspective.

“We kept running into each other at industry events and meetings,” Rey says. “We collectively recognized that we were each trying to solve the same problem and could combine our technical and engineering expertise to reinforce the transatlantic network and design a better cable for global connectivity.” 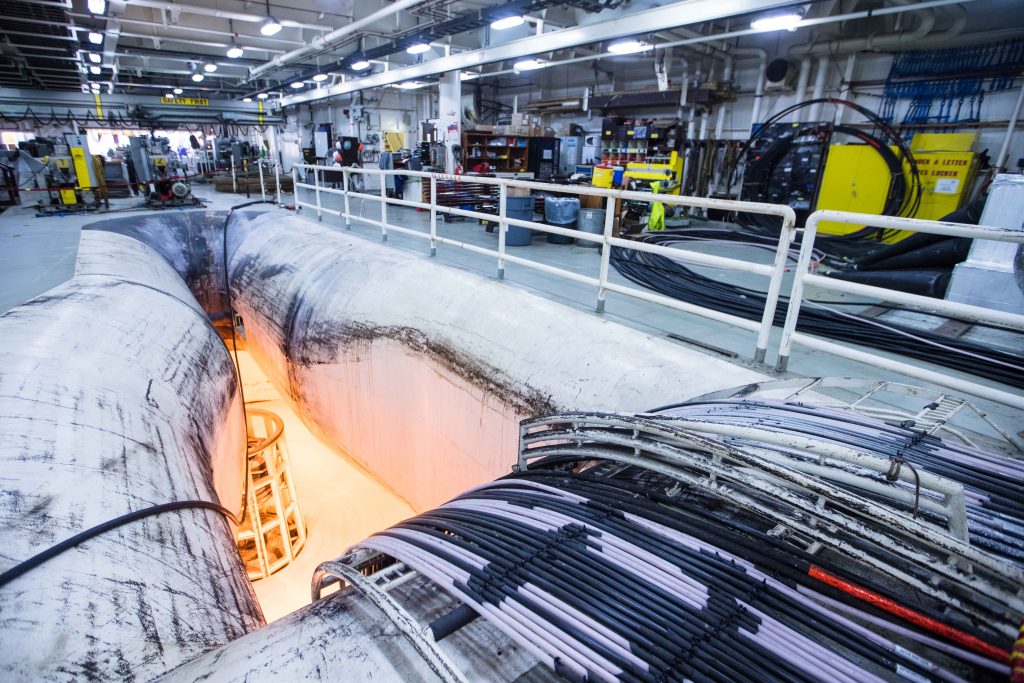 Marea is the highest-capacity subsea cable to cross the Atlantic, providing up to 160 terabits of data per second.

Microsoft and Facebook agreed to partner on the development, design and implementation of a 4,000-mile-long subsea cable connecting Virginia Beach, Virginia, and Bilbao, Spain. Global telecommunication infrastructure company Telxius, a subsidiary of telecom provider Telefónica, joined as the third partner to manage the construction process and operate the cable.

Dubbed Marea, Spanish for “tide,” it is the first subsea cable connecting Virginia and Spain. Situating the cable many miles south of the current connection points on both continents helps safeguard against natural disasters or other major events disrupting connectivity across the Atlantic.

Marea is also the highest-capacity subsea cable to cross the Atlantic, providing up to 160 terabits of data per second. That’s more than 16 million times faster than the average home internet connection, with the capability to stream 71 million high-definition videos simultaneously. Additionally, Marea’s landing point in Bilbao provides a convenient path to network hubs in Africa, the Middle East and Asia, and its enormous bandwidth will help meet the increasing demand for internet and cloud services.

“Marea comes at a critical time,” says Brad Smith, president of Microsoft. “Submarine cables in the Atlantic already carry 55 percent more data than trans-Pacific routes and 40 percent more data than between the U.S. and Latin America. There is no question that the demand for data flows across the Atlantic will continue to increase and Marea will provide a critical connection for the United States, Spain, and beyond.”

The project highlights the increasing role of private companies in building the infrastructure of the future. Microsoft and Facebook designed the cable to be interoperable with a variety of networking equipment. Through a new “open” design, the cable can evolve with technology, ensuring the highest performance for current and future users, even as the global population of internet users grows.

Najam Ahmad, vice president network engineering for Facebook, says Marea’s flexible design will allow the company to adapt to future needs and better support its increasingly data-intensive services. The cable also serves Facebook’s goal of enabling users to have “deep connections and shared experiences” with people around the world, he says.

“Obviously, connectivity is one part of achieving that goal. Marea will help us connect people more quickly and efficiently,” Ahmad says. “More broadly, robust connectivity can help a wide variety of people build relationships and collaborate between countries and across cultures.”

Rafael Arranz, chief operating officer for Telxius, says, “All of these applications, especially everything that is driven by video, consume a huge amount of bandwidth. So everybody needs to be connected with a high-volume, high-bandwidth infrastructure. With its unique route, this cable is going to be able to absorb and deliver back-and-forth traffic to strengthen communications, not just across the Atlantic, but across the globe.”

Marea will serve what has become an increasingly important route for cross-border data flows between the United States and Europe. Transatlantic data flows are expected to continue growing as more consumers use mobile smart devices to access the internet. By 2018, 93 percent of U.S. mobile devices and 83 percent of Western Europe’s mobile devices will be smart devices, according to a study by Brookings.

Taking a step to improve the resiliency of the internet infrastructure was something we saw as a positive for the entire global network, and a positive for people who rely on their digital devices for so many aspects of their daily lives.

Northern Virginia has long been one of the main internet data center hubs in the world, and for that reason Virginia Beach, on the southeastern tip of the state, was chosen as the U.S. landing point. Officials in Virginia Beach say the project will help diversify the city’s economy, which is heavily dependent on tourism and the area’s strong military presence.

“Marea is allowing us to become a digital port, not just a port city,” says Warren Harris, director of the Virginia Beach Development Authority. “And the fact that Microsoft is a partner in the cable has given us a level of validation to talk about the benefits of what Virginia Beach can mean for companies. I’m extremely excited.”

The project prompted Spanish metal manufacturer Sanjo to invest $17.5 million to build a new factory in Virginia Beach. The plant will serve as a branch of Sanjo’s Barcelona headquarters and enable it to better serve its global clientele, says Santiago Cruz Jr., the company’s vice president.

“Having good, high-speed communications allows us to have the two (sites) communicating at any time,” Cruz says. “In the end, everything we move is data and information.”

“We’re already seeing a lot of interest in data centers being developed here because of the connectivity of the cable,” Hudome says. “And it’s not just national, it’s also international. We see this as an opportunity for a whole new industry sector to develop and bring new capital investment and jobs with it.”

The project required charting a course with average depths of almost 11,000 feet and hazards ranging from active volcanoes and earthquake zones to coral reefs. The cable, which is about 1.5 times the diameter of a garden hose, contains eight pairs of fiber optic cables encircled by copper, a hard-plastic protective layer and a waterproof coating. Some portions closer to shore are buried to protect the cable from fishing and ship traffic, but for most of its route, the cable lays on the ocean floor.

Construction of Marea started in August 2016, and the cable began its journey across the Atlantic approximately five months ago. The physical work to manufacture and lay the cable has now been completed, and it is planned to be operational in early 2018. From design through construction, Marea was completed in less than two years — nearly three times faster than the typical subsea cable project.

For Rey, Hurricane Sandy drove home the need for the cable on both a personal and professional level. He was home with his family in New Jersey when the storm hit, toppling a tree in the yard and crushing a car parked outside with a force so violent it shook the house. Rey wanted to let relatives in Europe know that the family was safe, but with connectivity down, he couldn’t reach them.

“Everyone expects that whenever they turn on their computer or their tablet or their phone, they’re going to work. That’s what this cable is going to help enable,” he says. “Taking a step to improve the resiliency of the internet infrastructure was something we saw as a positive for the entire global network, and a positive for people who rely on their digital devices for so many aspects of their daily lives.”