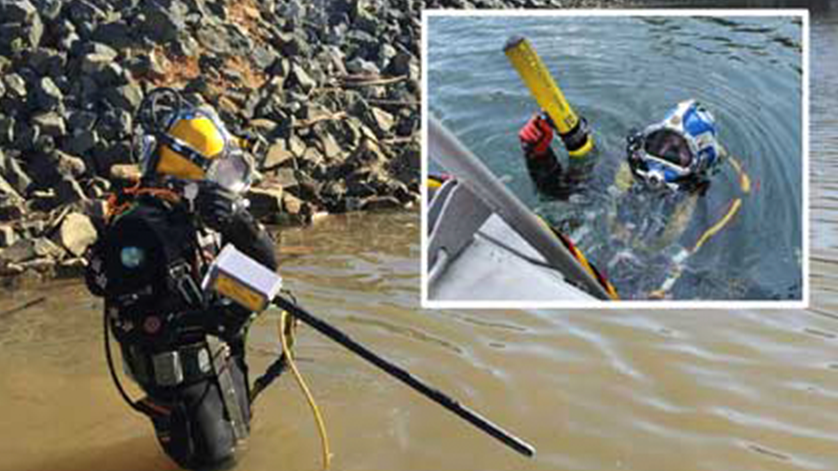 Utility companies have been laying pipes and cables across the ocean floor for more than a century. Prior to the introduction of GPS, marking their position was a difficult and tedious task, fraught with error. It is extremely important to know the exact location of existing lines before undertaking dredging operations or when new pipes and cables are laid down. Regulations require they be buried from several feet to several meters under the bottom to prevent snagging by boat anchors and fishing trawls. The amount of overburden typically makes it impossible to find these lines with conventional metal detectors as the burial depth is beyond their detection range. Two pieces of equipment that have proved most effective are the pinpointing magnetometer and the cable tracker. The pinpointing magnetometer is a very sensitive instrument that locates iron and steel pipes buried up to 16 feet in the bottom, and the cable tracker is powerful enough to detect a power or communications cable at more than 30 feet away.

New Jersey based Castle Group is employing both of these devices in their operations. The group consists of three firms; WJ Castle and Associates with marine engineering expertise, Hydro Marine Construction offering a complete range of commercial diving services, and Simplified Bridge Systems specializing in bridge construction. Founder William Castle has been providing marine construction and engineering services for over 30 years, and served on a number of industry boards including the International Association of Diving Contractors (IADC).

On a recent job the cable tracker proved an essential piece of equipment. Steve Gardner, dive supervisor and engineer for Castle reported, “We received an emergency call from a contractor working in Jersey City. A section of a privately owned pier was in danger of collapse. It needed immediate rehabilitation to prevent further deterioration and it becoming a hazard to navigation. The work included driving new steel sheeting into the bottom in an area with two high voltage underwater power lines. My team was tasked with locating and marking the cables to ensure they would not be disturbed while driving in the sheeting. For this job we employed our JW Fishers CT-1 cable tracking system. A diver with the CT-1 probe was deployed and he quickly located and marked their exact position. We had also brought along our JW Fishers PT-1 pipe tracker just in case the two high voltage lines were buried in one trench making it difficult to get a good reading on them. If this happened, our plan was to use the PT-1 to detect the steel armor on the cables. But as it turned out, the cable tracker worked perfectly.”

Another company successfully using the cable tracker is Marine Technologies Inc. (MTI), a commercial diving company and heavy marine contractor in Baltimore, Maryland. President Terry Clark reports, “We recently used our CT-1 on a project in New York tracking utility lines running under the Hudson River near the new Tappan Zee Bridge. Once all of the existing lines were successfully located with the cable tracker, our team installed 15,000 feet of new fiber optic cable six feet below the natural bottom of the river. We chose Fishers cable trackers because of their reliability and ease of operation, which are important with the remote locations we often work in. We have several CT-1 trackers and have used them on projects in places as far away as South America and Europe. Over the years they have performed flawlessly for us.”

Midco Diving and Marine Services has offices in Rapid City, South Dakota and Loveland, Colorado. They offer an extensive list of services including inspection, maintenance and repair of underwater structures, diver dredging, zebra mussel elimination, high-risk and haz-mat diving, as well as marine engineering and support. The company recently acquired a JW Fishers PT-1 pipe tracker to assist in locating a deeply buried 8 inch effluent pipe in South Carolina. Company president Robert Greenspan said the PT-1 worked well and was instrumental in helping their diver find and track over 800 feet of pipeline.