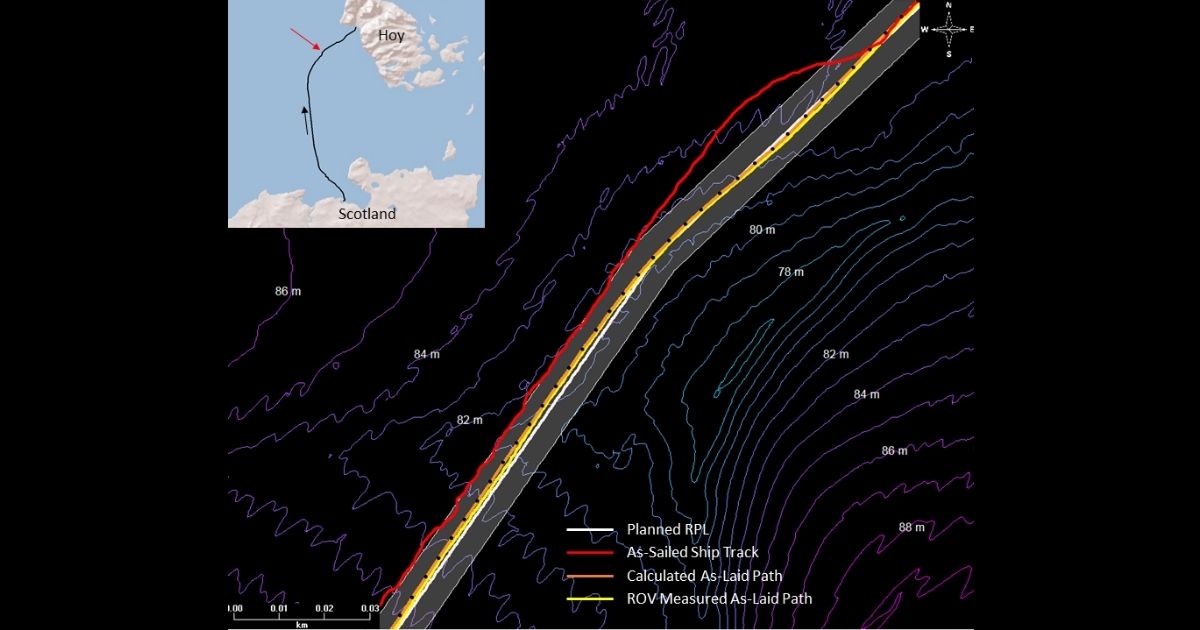 A section of the Pentland East cable installation showing the planned cable route (white) with a 5 m buffer, the as-sailed ship track (red), the MakaiLay calculated as-laid cable path (orange), and the post-lay ROV surveyed cable path (yellow).  The ship is tracking to the west of the planned route to accommodate for cable deflection due to the current.  The MakaiLay software is able to account for this deflection in real time by incorporating current profile measurements from a vessel-mounted ADCP.

The best-in-class cable deployment control software, MakaiLayTM, was commissioned on the Cable Laying Vessel (CLV) Normand Clipper in July 2020 by Global Offshore. Global Marine Group is a leading provider of subsea cable installation, maintenance and burial services world-wide for both telecom and power cables through its brands Global Marine and Global Offshore.

As part of Scottish and Southern Electricity Networks’ (SSEN) Pentland Firth East project, a 37 km subsea power cable was installed between the Scottish mainland and the island of Hoy, in Orkney. Global Offshore completed the installation using the Normand Clipper with support from Makai and their industry-leading subsea cable deployment software, MakaiLayTM. The cable was installed to a maximum depth of 90 m, with the majority of the route between 70 and 80 m water depth. The strong tidal currents in the region of the lay, were particularly challenging during this installation, with surface currents periodically exceeding 3 kts, and currents at depth exceeding 1 kt. The Pentland Firth is known to have one of the most powerful tidal currents in the world.

MakaiLay Average Current Viewer and Plan View displays from the Pentland power cable installation. The Current Viewer is a quick reference tool that uses the ADCP current profile data to display depth averaged currents (black arrow) relative to the planned route (red arrow). The Plan View is showing the planned route (purple line) along with the model calculated cable shape (orange line) being deflected to the east by the current. Also depicted are the ROV beacon location (blue cross) and ROV-monitored cable touchdown location (pink square). The ROV was tracking alongside the cable at a distance of 3.7 m.

“We were impressed with the accuracy of the MakaiLayTM Power Module, and believe the MakaiLayTM software will be a key component in proactively managing the cable installation and reducing dependence on ROV monitoring” said Ian Griffiths, Subsea and Cable Operations Survey Manager at Global Marine Group.

Data from a post-lay survey showed that the average deviation of the MakaiLay calculated as-laid cable path, from the post-lay ROV measured path was 0.73 m over the entire 34 km route.