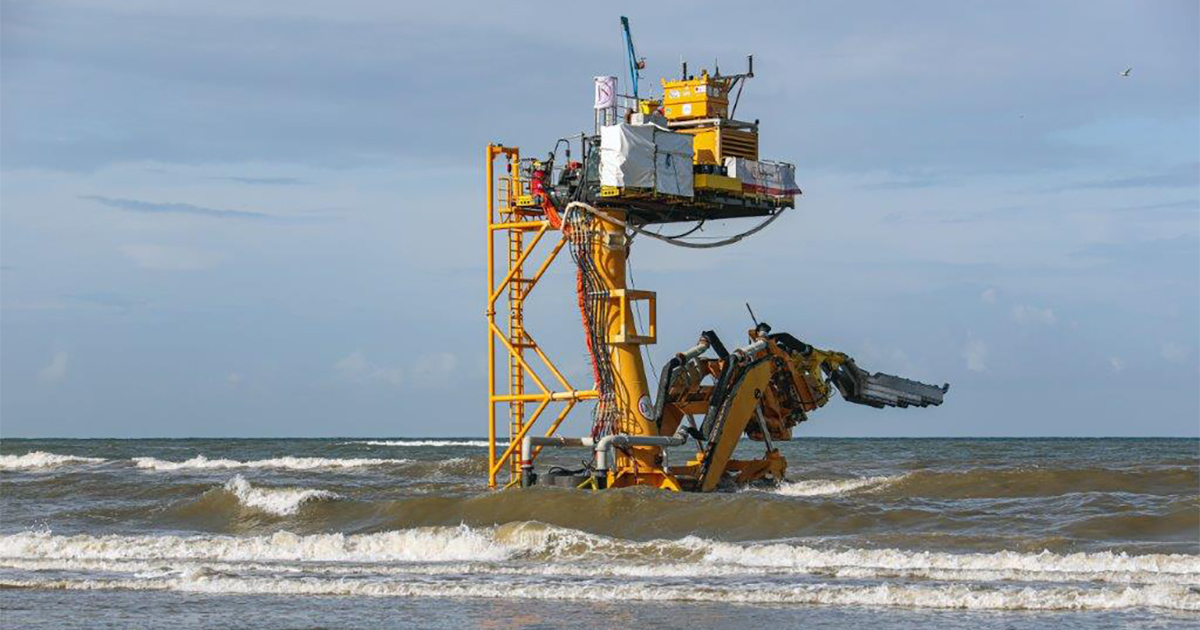 For the offshore wind farm Luchterduinen in The Netherlands, Jan De Nul was requested by Eneco to rebury a section of an existing export cable. To this purpose, Jan De Nul modified its in-house designed and fabricated intertidal trencher Sunfish and successfully reburied the nearshore section of the cable to a minimum depth of 2.5 meters below the seabed.

Due to morphological changes the export cable burial was over the last few years decreasing in depth within the nearshore section. To guarantee the cable will at all times remain sufficiently buried and thus protected, a reburial campaign was requested by Eneco.

Since the section of decreased burial depth was located in the nearshore zone, it was not accessible with typical offshore trenching vehicles nor could it be easily accessed from the beach. Jan De Nul offered Eneco the solution by mobilizing its intertidal trencher Sunfish. The Sunfish successfully lowered the nearshore part of the cable working up to 1 kilometer offshore and a water depth of 8.5 meters.

Tom Baguet, Project Manager at Jan De Nul Group: “Deepening the live export cable in a challenging intertidal zone with our unique in-house designed trenching vehicle Sunfish proves our expertise in various operational fields. We look back to an excellent cooperation with our client Eneco, the municipality of Noordwijk, KNRM and all local stakeholders.”

Ernest Diepstraten, Project Manager at Eneco: “Eneco greatly appreciated working together with Jan De Nul constructively in delivering this project in time and in budget. We are pleased that, thanks to the work of Jan De Nul Group, the cable to our Eneco Luchterduinen wind farm is buried deep enough again so that the wind farm can continue to supply power to our customers.”

Specifically for this project, the Sunfish was modified to a suitable post-lay jet-trenching vehicle with 2 water pumps delivering each 1250 m³/hr jet water and 3.5 m long jet swords. 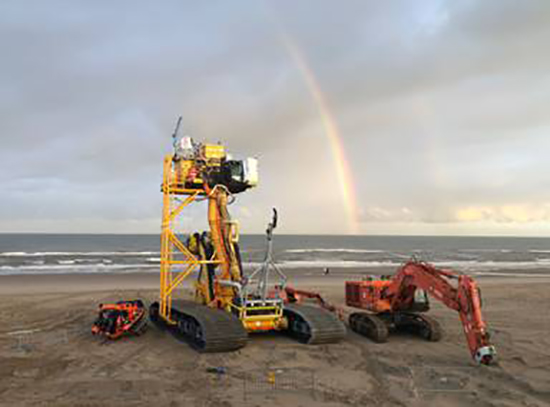 To accurately locate the cable, the Sunfish was further equipped with 2 sets of innovative cable tracker sensors of SMD’s innovative tracking system ‘Artemis’ using the live tone of the cable. As a result, Eneco did not have to switch off the wind farm during the entire campaign.

Lee Carden, SMD Head of Sales for Artemis: “SMD very much appreciated this opportunity to continue to trial our Artemis cable tracking technology on live projects. Following a robust series of offshore trials, this project enabled live cable reburial operations to be completed without turning off windfarm power. SMD very much looks forward to continuing our collaborative relationship with Jan De Nul, who have a great history of innovative approaches to their operations.”

The Eneco Luchterduinen Wind Farm is located in the Dutch sector of the North Sea, approximately 23 kilometers off the coast between Noordwijk and Zandvoort. 43 Vestas V112 offshore wind turbines produce a combined capacity of 129 MW. From the Offshore High Voltage Station (OHVS) one 150 kV export cable of 25 kilometers directs the current to the shore.